Today, in a landmark judgement, the Honourable Bombay High Court ruled in favour of PETA India by upholding the implementation of the order dated 21 August 2012 that had been passed by the Joint Secretary (Forests), Government of Maharashtra to release the well-known and much-abused young elephant Sunder to a sanctuary. 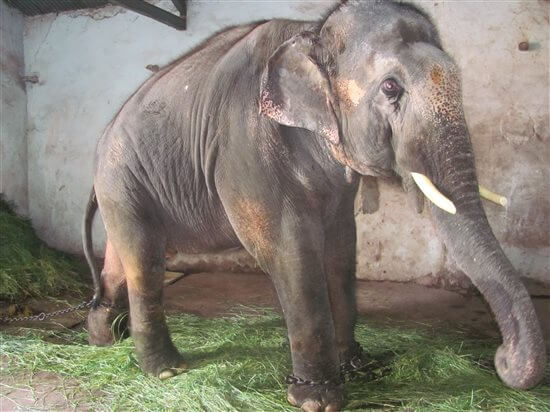 More than 2.2 lakh people from around the globe wrote to authorities seeking Sunder’s release through action alerts on PETA affiliates’ websites. Celebrities such as Paul McCartney, Amitabh Bachchan, Madhuri Dixit, Pamela Anderson, Arjun Rampal, R Madhavan, Gulshan Grover and many others took to Twitter or helped in other ways with the campaign for his release.

The court allowed the writ petition filed by PETA and dismissed the appeal filed by the Member of Legislative Assembly Vinay Kore, who had given Sunder as a “gift” to the Jyotiba temple in Kolhapur. The court also refused to stay its order, even though the senior counsel representing Kore requested as much. PETA was represented in the matter by Senior Counsel Shiraz Rustomjee and Counsel Rohan Rajadhyaksha, who were instructed by K Ashar & Co. Advocates & Solicitors, which was on record for PETA. Sunder is now slated to be transferred to the Wildlife Rescue and Rehabilitation Centre (WRRC) in Bangalore.

The Jyotiba temple came into possession of Sunder in 2007, but after constant chaining and beatings came to light, Maharashtra Minister of Forests Dr Patangrao Kadam and the Project Elephant division of the Ministry of Environment and Forests issued orders for Sunder’s release to a sanctuary on 21 August 2012 and 9 November 2012, respectively. However, those orders were never carried out, and Sunder was then spirited away at the behest of Kore and hidden in an old poultry shed, where he remained in chains. In December 2013, PETA obtained video footage showing that his mahout was violently beating him, and veterinarians and elephant experts who examined Sunder found him scarred, wounded and chained so tightly that he couldn’t lie down.

The campaign for his release spanned 21 months, as people in India and around the world worked to save him from his abusers. PETA thanks everyone who sent letters to authorities calling for his release and who helped with the campaign in other ways. PETA will keep working until Sunder is safe and happy in his new home.