The High Court of Bombay has adjourned for a week PETA’s case seeking the release of Sunder, a 14-year-old elephant, to a sanctuary. The court adjourned after a lawyer for Vinay Kore, a member of the Legislative Assembly, said that he filed a petition yesterday. 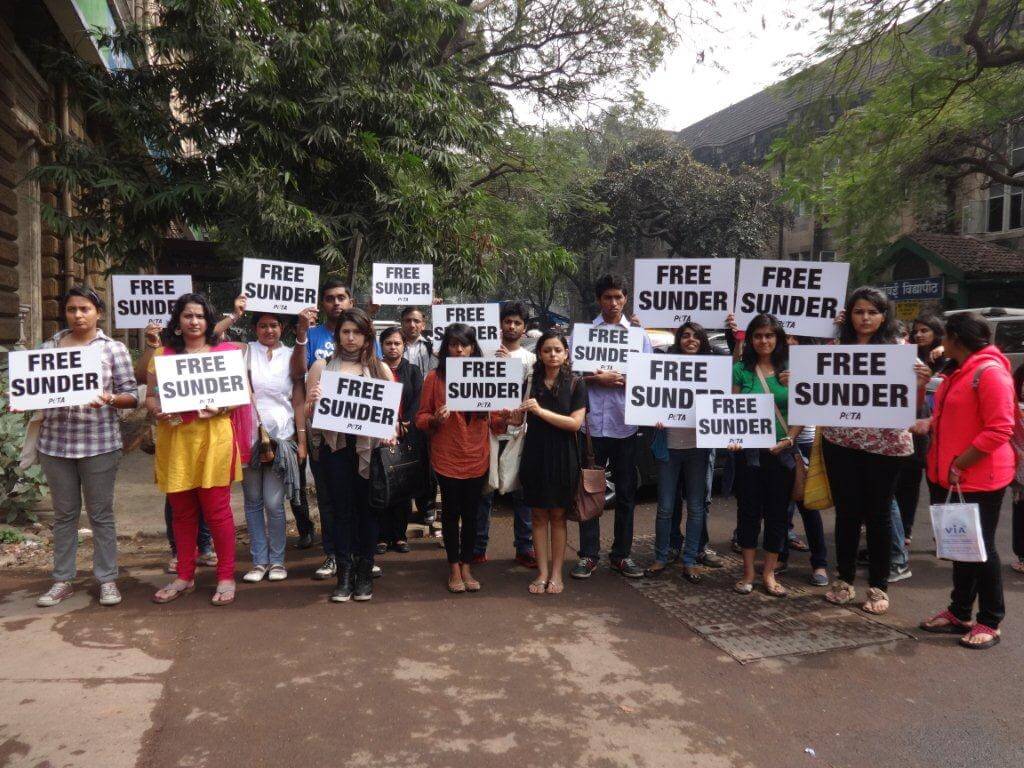 Sunder supporters outside the High Court of Bombay.

In its affidavit presented to the court yesterday, the Maharashtra State Forest Department claimed that it has been attempting to move Sunder to a sanctuary as per a December court order but has had no luck. However, PETA points out that the forest department has been ignoring our offer to transfer Sunder to a sanctuary, calling into question the department’s genuine interest in complying with the court order.

A video from an undercover investigation conducted by PETA in December shows shocking footage of a mahout (handler) violently beating Sunder with a thick wooden pole. The elephant, chained by two legs, writhes in pain and struggles to stand as the mahout strikes him repeatedly with the pole. Sunder spent six years chained at the Jyotiba temple and was later chained up and locked in a dark poultry shed in Warananagar at the behest of Kore, who had given the elephant to the temple.

“It’s high time for Sunder to be freed from this abuse and sent to a sanctuary, where he can roam, bathe in ponds and live unchained and in the company of other elephants”, says PETA Director of Veterinary Affairs Dr Manilal Valliyate. “Every day Sunder’s rescue is delayed means another day of almost unimaginable suffering for this poor young elephant.”

Actor Arjun Rampal, along with PETA representatives, met Maharashtra State Forest Minister Dr Patangrao Kadam at his residence to hand-deliver a letter. It urges the Minister to take immediate action in order to ensure that Sunder is sent to a sanctuary. The actor also extended an offer to donate a life-size statue of an elephant to the Jyotiba temple in exchange for transferring Sunder to a sanctuary that PETA has chosen. Although both Kadam and the High Court of Bombay have ordered that Sunder be transferred, he is still in the hands of his abusers.

Joining Rampal in his call to #FreeSunder have been Amitabh Bachchan, Madhuri Dixit, R Madhavan, Raveena Tandon and many other top celebrities who took to Twitter or joined the campaign in other ways. In addition, more than 80,000 people have signed the online petition on PETAIndia.com calling for Sunder’s release.