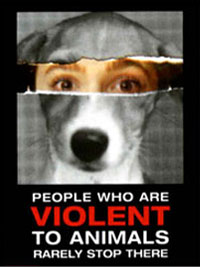 Violent acts towards animals have long been recognised as indicators of a dangerous psychopathology that does not confine itself to animals. “Anyone who has accustomed himself to regard the life of any living creature as worthless is in danger of arriving also at the idea of worthless human lives”, wrote humanitarian Dr Albert Schweitzer.

Robert K Ressler, who developed profiles of serial killers for the US Federal Bureau of Investigation (FBI), states, “Murderers … very often start out by killing and torturing animals as kids”. Studies have now convinced sociologists, lawmakers and the courts that acts of cruelty to animals deserve our attention. They can be the first sign of a dangerous pathology that threatens humans as well.

Animal abuse is not just the result of a minor personality flaw in the abuser but rather a symptom of a deep mental disturbance. Research in psychology and criminology shows that people who commit acts of cruelty to animals don’t stop there; many of them move on to their fellow humans.

A study conducted in the US by Northeastern University and the Massachusetts SPCA found that people who abuse animals are five times more likely to commit violent crimes against humans. The majority of inmates on death row in California’s San Quentin State Prison “practiced” their crimes on animals, according to the prison’s warden.