Football, cricket, kabaddi – these are sports. Spectacles such as jallikattu, using animals for racing, and forcing them to fight aren’t. For animals, these activities are no game – they’re often a matter of life or death.

Jallikattu
In several districts of Tamil Nadu, jallikattu events are held, in which mobs of men terrify and chase bulls, who become so frightened that they often slam into barriers or spectators, often breaking their own bones, sometimes dying, and regularly injuring or killing humans in the process.

Because the bulls are reluctant to run towards the mob, they’re often yanked by their nose ropes, struck with whips and nail-studded sticks, prodded and stabbed with sickles and spears, and bitten on their tails by participants.

PETA India has long campaigned against this cruelty and has conducted multiple investigations into the events.

Jallikattu events have resumed since 2017, when a Tamil Nadu state law was passed allowing them, apparently in contradiction to the protection these animals are guaranteed under the central government’s Prevention of Cruelty to Animals Act, 1960. Since that time, dozens of humans and many bulls have been killed in these violent spectacles.

PETA India continues to fight to have these events banned in the Supreme Court. 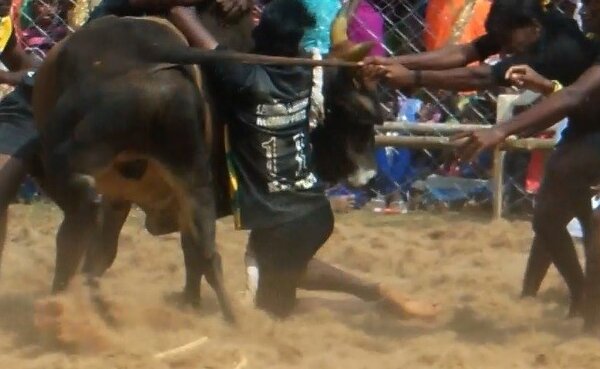 As documented in PETA India’s investigations, bulls forced to race in Maharashtra are commonly deprived of food, water, and shade and are roughly yanked by nose ropes, causing their noses to bleed. Participants bite and twist the bulls’ tails, strike them, and rub irritating substances into their mouths to get them to run. They’re hit with nail-studded sticks or whips, and frenzied participants sometimes even break their tailbones at the joint, which is as painful as breaking a human’s finger.

In Tamil Nadu, participants were even filmed shocking bulls with nail-studded wooden sticks that had electric wires attached to them in order to agitate the animals before races.

The use of bulls in activities such as races is banned. If you learn of a planned race, please contact PETA India.

Kambala
A PETA India investigation documented that buffalo bulls were subjected to rampant cruelty during kambala (buffalo racing) events in Karnataka. They were beaten and prodded with wooden sticks, and their tails were yanked. Some had marks on their hindquarters and bloody wounds from being beaten. Animals who were reluctant to race were pulled by their nose ropes and dragged to the starting line. Many had several thick nose ropes inserted through their nasal septum, causing them tremendous pain. Bulls who finished the race breathed heavily and frothed at the mouth.

Dogfighting
Pit bulls are widely used in Punjab and other parts of India for dogfighting, a cruel and illegal blood “sport” that leaves many dogs mangled, bloody, soaked with urine and saliva, and unable to walk. After the fights, the “losing” dogs are often tortured, shot, or just left to suffer and die from fatal injuries inflicted by their opponents.

Cockfighting
Cockfighting is also illegal in India. Roosters raised for fighting are kept tied or caged when not being forced to fight. Razor-sharp spurs are attached to their feet to make fights more “exciting” (i.e. bloody). The birds sustain broken wings and legs, punctured lungs, severed spinal cords, and gouged-out eyes. Those who survive may be forced to fight again or be killed.

Greyhounds forced to race are treated like machines, and many spend most of their lives muzzled and confined to cramped kennels. Health issues and injuries – including broken legs, heatstroke, and heart attacks – claim the lives of many dogs used for racing.

Around the world, the horse-racing industry has been found to be rife with drug abuse and often-fatal injuries, and many horses used for racing end up at slaughterhouses. In India, horses discarded from various industries often end up being used as living blood factories for drug production.