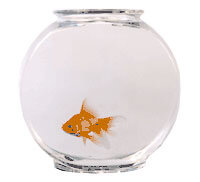 Animals in aquaria suffer just as animals in zoos do. Fish and other marine animals who are accustomed to swimming freely in vast oceans are confined to small tanks in which they are forced to swim in endless circles. The tanks are often barren, containing no sand, no rocks and no plants – nothing that remotely resembles anything in the animals’ natural homes. Fish in aquaria are also subjected to the constant glare of artificial lights and the droning of pump motors, and because they sometimes fail to recognise that the glass that holds them in is a barrier, they often sustain facial injuries after swimming into it.

Dolphinaria – marine-mammal parks in which dolphins and other animals are forced to perform tricks to entertain visitors – are among the cruellest captive-animal displays. Dolphins navigate by echolocation, bouncing sonar waves off objects to determine their shape, density, distance and location. According to Ocean Futures Society founder Jean-Michel Cousteau, dolphins who are kept in tanks “are bombarded by a garble of their own vocalisations. … Because these are sounds of communication as well as navigation, their world becomes a maze of meaningless reverberations”. Dolphins are highly social animals who swim together in pods of three to 10 individuals – or tribes of hundreds. In nature, they may swim up to 100 miles a day, so keeping them in concrete tanks is extremely cruel. The stress of captivity also weakens dolphins’ immune systems, negating the purported benefits of aquarium life (such as veterinary care and regular meals) and often leading to illness or even death. At least three dolphins have died in Asia’s first dolphinarium, which is located in Tamil Nadu.

Please do not patronise zoos, aquaria or dolphinaria. If no one visits these sad displays, they will eventually be forced to close down.