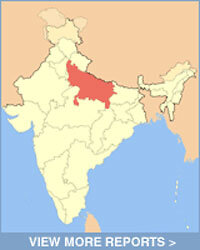 The rhinoceros enclosure is barren.

There is dirty stagnant water in the rhinoceros enclosure.

This is one of two drains which runs right through the zoo.

This orangutan lives in a barren cement cage with no environmental enrichment at all.