Last week, the state government informed the High Court of Bombay that its efforts to relocate the 14-year-old male elephant Sunder to a sanctuary as per a 10 December 2013 High Court order failed because he is in musth (a period of sexual urge in male elephants), which is, according to officials, making him aggressive. A member of the Legislative Assembly, Vinay Kore, also claimed that steps are being taken to provide the elephant with adequate care. 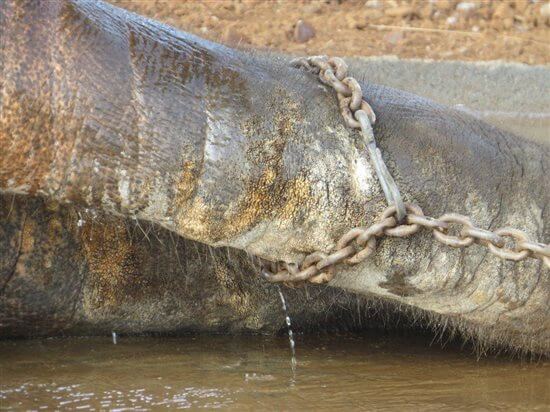 However, a new report from Dr TS Rajeev of the Centre for Elephant Studies, College of Veterinary and Animal Sciences in Mannuthy, and Dr Sasindra Dev, Forest Veterinary Officer, Konni – two independent elephant experts from Kerala who examined Sunder on 20 December 2013 and were authorised by the Animal Welfare Board of India a statutory body operating under the Ministry of Environment and Forests to do so – states that Sunder is neither in musth nor showing physical or behavioural signs of pre-musth and is “generally apathetic”, not aggressive, in nature. The experts’ report also reveals that although Sunder is not suffering from a disease – which means that there is no reason why he would not be fit for transfer to a sanctuary – he is being kept chained constantly and is suffering both physically and mentally.

Earlier this month, PETA released an undercover video showing Sunder being violently beaten by his mahout.

PETA has filed a petition asking that the Maharashtra Forest Department implement its own order – as well as the recommendation from Project Elephant under the Ministry of Environment and Forests – and retire Sunder to a sanctuary. On 10 December, High Court justices MP Kanade and MS Sonak ordered Maharashtra Principal Chief Conservator of Forests (Wildlife) Sarjan Bhagat to adhere to the ministerial order. Bhagat had been asked to submit a compliance report to the court by 23 December, but so far the state government has failed to move Sunder. The case has been adjourned to 21 January 2014.

Sunder spent six years chained at the Jyotiba Temple in Kolhapur, and despite the ministerial order calling for his release to a sanctuary, he was locked in an old, dark poultry shed and chained at the behest of Vinay Kore, who had given the elephant as a “gift” to the temple.