The time has come for PETA India to name its Most Beautiful Vegetarian Celebrities of the year – and actors John Abraham and Fatima Sana Shaikh have won the coveted title.

Fresh off the set of her last action thriller, Thar, Shaikh is vocal about her passion for helping animals. The Dangal and Thugs of Hindostan star has shared pictures of her fostered cats with her 3 million Instagram followers and spoken up for improving animal-care facilities in Mumbai.

Previous PETA India Person of the Year winner Abraham has tirelessly advocated for animals in need, including teaming up with PETA India to successfully urge e-commerce website Quikr to stop permitting animal sales and urge e-ticketing platform BookMyShow to promote animal-free circuses only. The recipient of a National Film Award and five Filmfare nominations, Abraham is also a film producer and guardian to two adopted dogs, Bailey and Sia.

In today’s meat, egg, and dairy industries, most animals are raised in vast warehouses in severe confinement. As PETA India reveals in the video exposé “Glass Walls”, chickens killed for food are often shackled upside down before their throats are slit. Cows and buffaloes are crammed into vehicles in such large numbers that their bones often break before they’re dragged off to the slaughterhouse, and pigs are stabbed in the heart as they scream. On the decks of fishing boats, fish suffocate or are cut open while they’re still alive.

Eating more plants also slashes the risk of suffering from cancer, heart disease, diabetes, and obesity; helps fight the climate catastrophe by reducing greenhouse gas emissions; and can even prevent future pandemics. COVID-19, SARS, swine flu, and bird flu have all been linked to confining and killing animals for food.

Shaikh will be seen next in Sam Bahadur as the late Indira Gandhi, and Abraham next stars in Pathaan, the most anticipated upcoming movie. 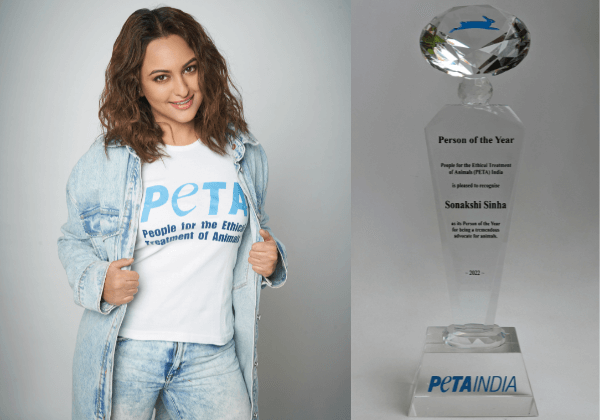