Celina Jaitly recently took to Twitter to urge her fans to help #FreeSunder – the captive elephant held in Kolhapur by Maharashtra Member of the Legislative Assembly (MLA) Vinay Kore, and now the actor and ambassador for the United Nations Free & Equal campaign has gone a step further by rushing to the Colaba police station urging them to act against the abuse of Sunder after the 14-year-old elephant was found suffering from a massive wound on his leg. Senior Inspector Rameshwar Supley acknowledged the complaint from Jaitly. Meanwhile, a complaint against the abuse was also filed by Naresh Kadyan of People for Animals in Delhi after he learned about Sunder’s wound. 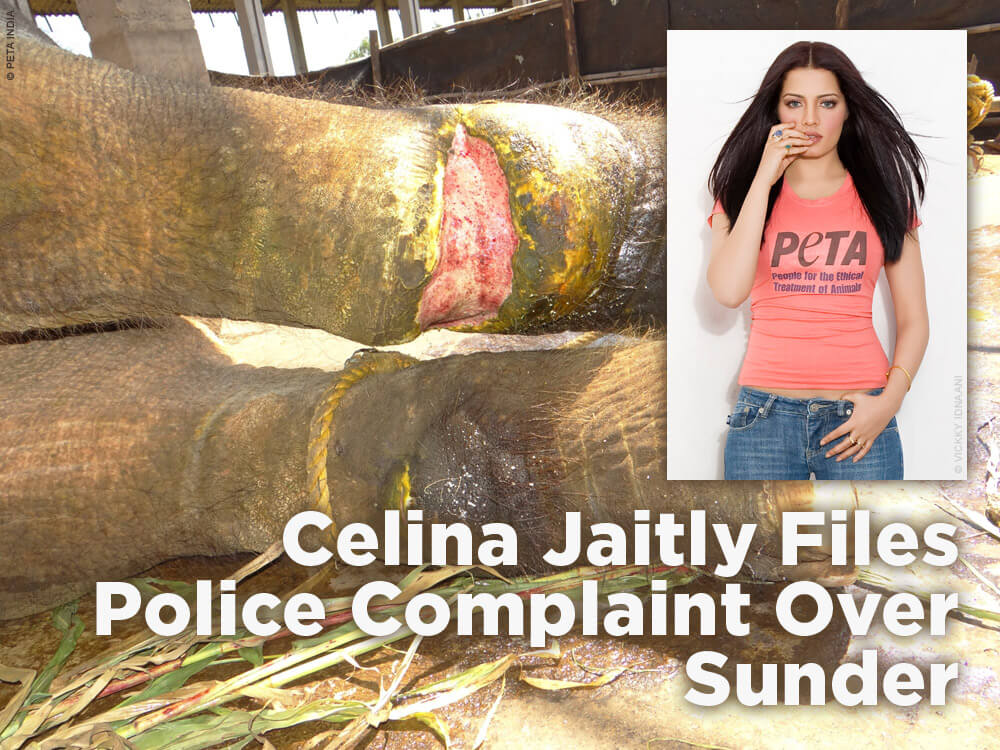 Meanwhile, a complaint against Sunder’s abuse was also filed by People for Animals’ Naresh Kadyan in Delhi after he learned about Sunder’s wound.

During a recent veterinary inspection by an elephant expert, Sunder was found with what the health examination report calls a “MASSIVE wound … as a result of constant tying with heavy chains”. The expert’s report also states that Sunder should be moved from Kolhapur to an elephant-care centre in Bangalore “on an emergency basis” as directed by the Bombay High Court. The court had ordered the Maharashtra Forest Department to move Sunder to the centre before the monsoon season. But Kore – who is not the legal owner of Sunder and has kept him on his property illegally – has attempted to block the order by filing an appeal with the Supreme Court. PETA has been campaigning for Sunder’s release since 2012 and is represented in the Supreme Court by leading animal advocate Raj Panjwani.

All the paperwork for Sunder’s transfer has been completed, and now the Maharashtra Forest Department simply needs to move Sunder. The health examination report also stated that Sunder’s wound can be dressed, as he is not in musth (a period of sexual urge in elephants that can make them difficult to handle), and he can and should be transported to Bangalore quickly.

If you wish to help, you can write to Maharashtra forest officials at: