PETA India has filed an affidavit in the Supreme Court of India presenting fresh evidence of cruelty to dogs who are imprisoned and denied exercise and socialisation at the Tamil Nadu Animal Husbandry, Dairying and Fisheries Department’s dog-breeding unit (DBU) at Saidapet, Chennai. Despite being a government centre, the DBU breeds dogs to sell to the public.

PETA India’s investigation report also reveals that following a petition challenging the 2016 order of the Madras High Court that directed the closure of the DBU for not providing dogs with basic care and for not meeting the terms and conditions set by the Animal Welfare Board of India (AWBI) – a statutory body that operates under the Ministry of Environment, Forest and Climate Change and registers breeders – the state government provided the Supreme Court with obviously fabricated photographs supposedly showing animals being treated properly.

PETA India’s investigator visited the DBU from 12 to 14 March 2018 and documented that none of the adult dogs or puppies were allowed to play, exercise, or socialise at any time in the areas of the facility designated for those purposes. Our photos and video footage contradict the DBU’s claims in its daily activity chart, which was filed through an affidavit in the Supreme Court, that dogs are taken for exercise and socialisation for two hours in the morning, from 7:15 to 9:15, and two hours in the afternoon, from 3 to 5. The dog socialisation ground was in a state of utter neglect, and photos show that its entrance gate and the plant containers located on either side of the gate were littered with empty liquor bottles and lids, disposable plastic cups, snack packets, and accumulated dry leaves, suggesting that the ground has probably been unused for several months except for unsavoury activities.

In 2017, the Tamil Nadu state government claimed before the Supreme Court that DBU employees personally exercise each dog in a 3,000-square-foot exercise paddock, and it submitted photographs, which PETA India noticed were obviously Photoshopped. A basic examination of the images reveals inconsistencies, such as missing objects – including part of the fence, a pole that supports the fence, and the middle portion of a leash on a dog being walked by a man – and a layer of green grass that was apparently mistakenly added onto a blue-coloured pole, which all indicate that the images were poorly altered. Our report points out that the state government filed these fabricated photos with a view to misleading the court regarding the actual conditions in the DBU.

PETA India began its court case against the DBU after a 2013 inspection authorised by the AWBI revealed that dogs were constantly confined to kennels and given no exercise, socialisation, or grooming. In November 2014, following an order of the Madras High Court, a second inspection by AWBI revealed that dogs were still kept constantly imprisoned and that many suffered from tick bites, dermatitis, and mange. In December 2016, the High Court directed the closure of the DBU within two months. In January 2017, the Tamil Nadu state government challenged the order before the Supreme Court, and in February 2017, the Supreme Court stayed the order. In March 2017, the state filed an 18-page affidavit, along with 13 allegedly recent photographs of the DBU, claiming that it was in compliance with India’s animal-welfare laws – a claim that PETA India is now exposing as false.

You can help dogs. Always opt to rescue an animal companion from the street or adopt one from a shelter – never buy one. Take the pledge: 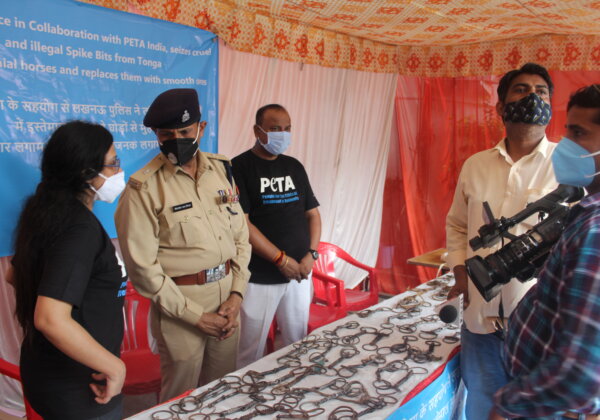