Lucknow police, with the help of PETA India, conducted enforcement drives throughout the city against the illegal use of spiked (or “thorn”) bits, which are used to control horses exploited for work, weddings, and rides, despite being prohibited under Rule 8 of The Prevention of Cruelty to Draught and Pack Animals Rules, 1965. The team intervened in the cases of more than 100 horses, replacing the spiked bits with plain ones. PETA India and Lucknow police displayed the confiscated spiked bits at the Hazratganj police station as part of an awareness drive to let the public know their use is illegal. At the event, an awareness programme for tonga owners and drivers was also organised to encourage them to discontinue cruel practices and to help them understand the benefit of choosing livelihood alternatives such as e-rickshaws. 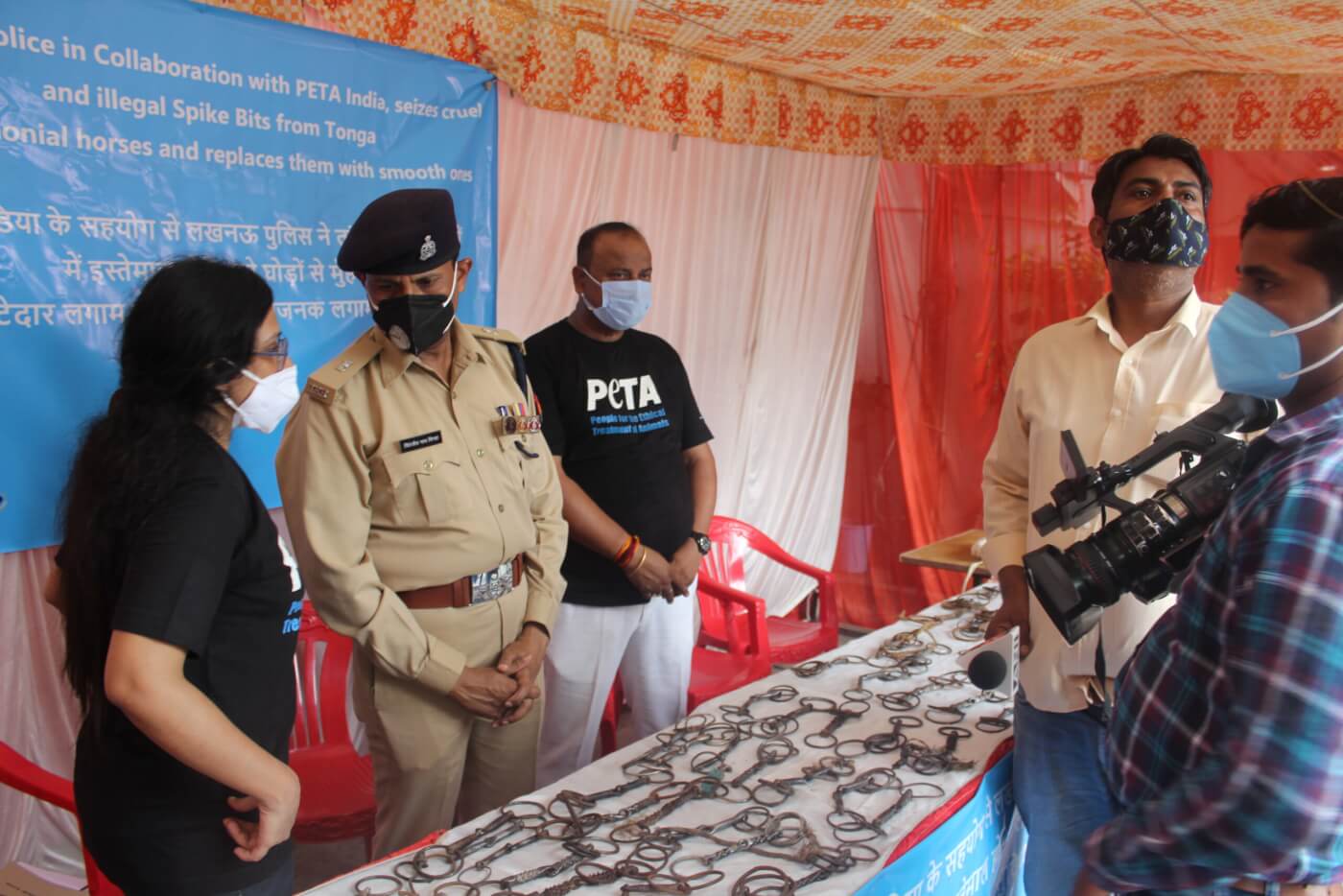 “Lucknow police’s stance on enforcing animal protection law is strict and clear: firm action will be taken against anyone who abuses any animal or causes them unnecessary pain or suffering,” says Chiranjeev Nath Sinha, additional deputy commissioner of police, Central Lucknow. “I appreciate the work of PETA India for generating awareness in the city, for supporting the police with implementing the law, and replacing the spiked bits with plain ones.”

As per Section 38(3) of The Prevention of Cruelty to Animals Act, 1960, any person who contravenes the 1965 Rules by using a spiked bit shall be subject to punishment, which could include imprisonment. In 2014, the Animal Welfare Board of India issued an advisory requesting that states and union territories impose a ban on the manufacture, trade, possession, and use of spiked bits. Similar law-enforcement drives were conducted by Delhi police in 2018 and 2019 and by Himachal Pradesh police in 2020 following complaints by PETA India, which has requested that the central government implement a law to ban the manufacture, possession, and sale of spiked bits, too.

In 2018, PETA India launched a project to replace the use of bullocks and horse carts with battery-operated e-rickshaws in Delhi. The families benefitting from the project report that using an e-rickshaw has dramatically increased their earnings and enhanced their social and economic status. The vehicles allow the former horse and bullock cart owners to avoid the disruption of livelihood caused by infectious zoonotic diseases and the downtime that occurs when animals simply can’t work – such as when horses are injured or road restrictions apply to animal carts.

Help Us End the Use of Illegal Spiked Bits on Horses