What do you get when you put the most talked about electronic dance music festival in India together with the country’s most headline-grabbing youth animal rights group? Supersonic 2013! PETA Youth, a division of PETA India for teens and 20-somethings, has been invited to be the social-justice partner at Supersonic 2013, which will be held from 26 to 30 December at Candolim Beach in Goa. Nikhil Chinapa joined hands with LIVE Viacom18 and M/s Starlight Events & Ent Pvt Ltd to become the festival director of VH1 Supersonic 2013. Look out for the cool PETA Youth booth, where we’ll be giving away free hugs to vegans and vegetarians as well as handing out cool stickers, celebrity posters, T-shirts and badges. 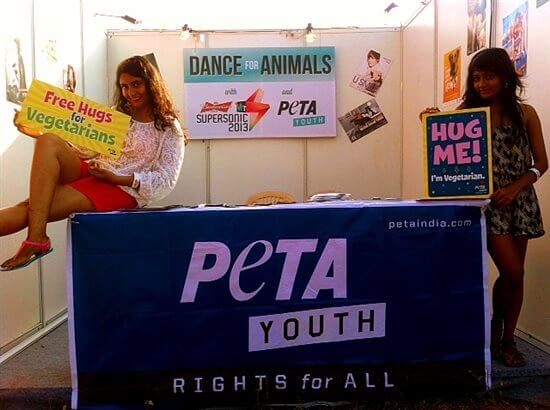 PETA Youth’s volunteers will also be recruiting for PETA’s highly active Street Team and collecting petition signatures to urge the government to pass the draft Animal Welfare Act, 2011, in the form prepared by the Animal Welfare Board of India. The new law would ensure that anyone who abuses or neglects an animal – whether a dog on the street, an overworked donkey or an animal forced to perform in a travelling show – is brought to justice and pays the price.

PETA Youth supporters – including musicians Parikrama, Indian Ocean, Monica Dogra, Raghu Dixit Project and Anoushka Shankar – have used their art to encourage young people to get involved in one of the fastest-growing movements for social justice in the world: animal rights.