Ahead of her upcoming films Kakuda and Double XL, Bollywood actor Sonakshi Sinha is the star of a new campaign for PETA India that encourages fans to ditch leather and wear vegan. Holding a bag that’s dripping with “blood”, Sinha calls attention to the more than 1.4 billion cows, sheep, goats, dogs, cats and other animals who are slaughtered for leather each year. 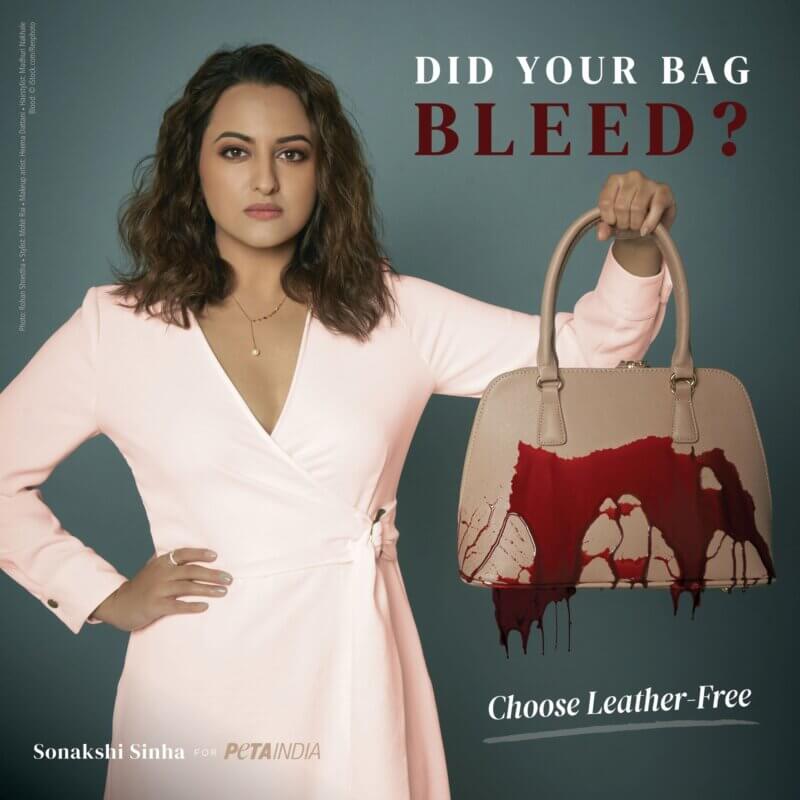 Ace photographer Rohan Shrestha shot the ad, while Sinha’s outfit was styled by Mohit Rai and her hair by Madhuri Nakhale. Her make-up was done by Heema Dattani.

“Cows and buffaloes are intelligent, emotional animals who mourn the loss of and separation from loved ones, so I choose vegan leather and other compassionate materials when I shop,” says Sinha. “Through this campaign with PETA India, I hope to inspire more people to keep fashion fun, not grisly, by wearing vegan.”

Animals used for leather in India are often crammed into vehicles in such large numbers that many become severely injured or die en route. They are then dragged into slaughterhouses, where they are cut open in full view of one another on floors covered with faeces, blood, guts, and urine.

Leather production also wreaks havoc on the environment. The 2017 “Pulse of the Fashion Industry” report concluded that bovine leather is the most polluting material in fashion. Turning animals’ skins into leather requires massive amounts of toxic chemicals, and run-off from leather tanneries poisons local waterways. Leather production is also harmful for those who live near or work in tanneries. In Bangladesh’s Hazaribagh area, 90% of leather tannery workers die before the age of 50.

Sinha has previously joined other stars in calling for the strengthening of animal protection laws, starred in a pro-adoption campaign for PETA India, and penned a letter on our behalf pushing for the transfer of an abused elephant near Jaipur.