Following complaints filed with local police by animal activist Vijay Rangare and PETA India, a First Information Report (FIR) has been registered against a man for allegedly raping a female stray dog in Kharghar, Navi Mumbai. We worked with the commissioner of police, Navi Mumbai; the deputy commissioner of police, Zone II, Panvel; and the Kharghar police station’s senior police inspector to help register the FIR under Section 377 of the Indian Penal Code (IPC), which states that the rape of an animal by a human is a crime carrying a prison term of up to 10 years. The alleged perpetrator, who is thought to be a repeat offender who may have previously sexually abused other animals, was arrested by police. If released, he could go on to attack a human in the same way.

Acts of cruelty to animals such as this one indicate a deep mental disturbance. Research in psychology and criminology shows that people who commit acts of cruelty to animals often don’t stop there – many move on to hurting humans. In a study of domestic violence victims, 60% of women said that their abusive partners had harmed or killed their dogs or other animals. 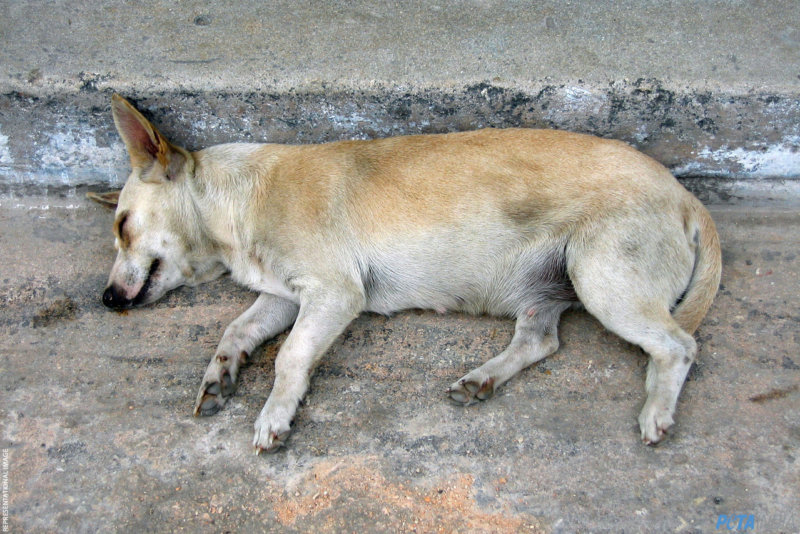 PETA India has sent a letter to the central government urging it to amend The Prevention of Cruelty to Animals (PCA) Act, 1960, to include bestiality as a cognisable offence and to introduce stronger penalties for cruelty to animals. The letter notes that several recent cases of sexual abuse of animals by humans, for which the accused were charged under Section 377 of the IPC, indicate the need for harsher penalties under the PCA Act, 1960. The cases include those of a man in West Bengal who was arrested for dragging a stray dog into his house and raping the animal and a security guard who was regularly caught raping a female stray dog in a washroom. Police found video footage of an accused murderer in Kerala sexually assaulting a goat, and a carpenter in the same state was arrested for sexually abusing a dog. In Madhya Pradesh, two men, aged 25 and 50, were arrested and charged for raping a cow in separate incidents. And an 18-year-old man from Delhi was charged with committing bestiality on a calf.

Please join us in calling for stronger penalties for animal abuse now.