PETA India has written to Chief Election Commissioner SY Quraishi asking him to allow us to put the covered Uttar Pradesh elephant statues to good use. While the statues are covered, PETA India would like to put banners on them that read, “Cover-Up by the Big Top: Elephants in the Circus Are Beaten and Shackled”. Here is a mock-up of what the banner would look like on a covered elephant statue. 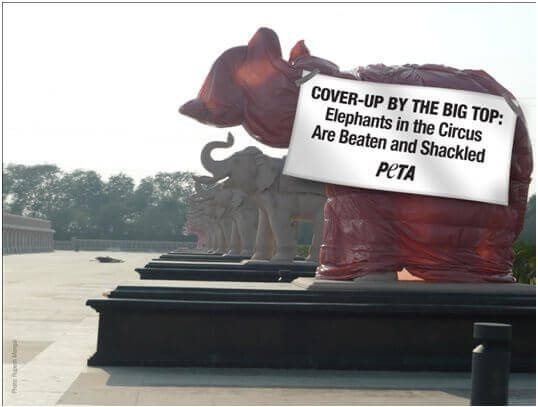 This high-profile “cover-up” would help expose the cruelty to animals that circuses work hard to cover up. When they’re not being forced to perform meaningless tricks that are confusing to them, elephants used in circuses are kept shackled. These majestic creatures are trained through beatings and the fear of physical punishment. Circuses are no fun for other animals either. Birds used in circuses often have their wings clipped, which prevents them from engaging in their most important natural behaviour: flying. Horses are often kept tethered with short ropes, and dogs are locked in cages.

PETA India Chief Functionary Poorva Joshipura wrote, “The covering of the statues and party symbols has caught the attention of people around the globe. By allowing us to place these banners on the elephant statues, you would help us encourage people worldwide to boycott circuses, thereby helping countless animals whose pain goes unnoticed. Supporting us in this good deed may also help to quiet those who have criticised the move to cover the statues. It would be a win-win situation”.

Would you like to see the elephant statues being used this way?