Following an appeal from PETA India to prohibit the manufacture, sale, and use of gestation and farrowing crates in pig farming, Uttar Pradesh’s Animal Husbandry Department has issued directions instructing the chief veterinary officers in the state to ensure that no pig farms are using such illegal crates and to take strict action against any pig farmer found to be doing so. The circular specifically states that any violations must be brought to the attention of the district magistrate and the Society for the Prevention of Cruelty to Animals after quarterly surveys of the pig farms for potential legal actions. Uttar Pradesh is the country’s second-largest pig-producing state.

The circular cites the Prevention of Cruelty to Animals Act, 1960, which prohibits the confinement of any animal in a receptacle that fails to offer a reasonable opportunity for movement, such as gestation and farrowing crates. Confining animals in this way is illegal, a position confirmed by the Indian Council of Agricultural Research’s National Research Centre on Pig. Circulars requiring the enforcement of this law or prohibiting the use of the crates have also been issued by the governments of Delhi, Goa, Gujarat, Himachal Pradesh, Karnataka, Madhya Pradesh, Meghalaya, Rajasthan, and Uttarakhand following PETA India’s appeal. A similar circular was previously issued by the Manipur and Punjab governments. 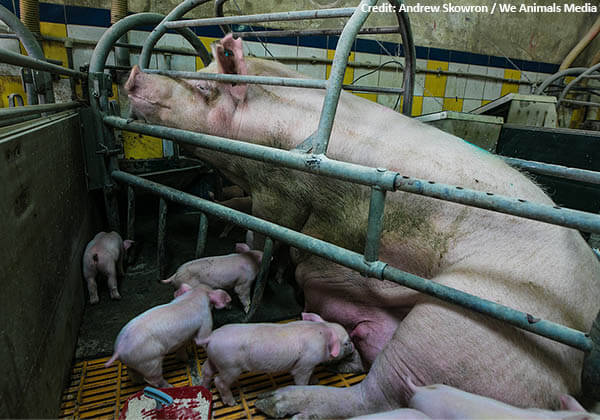 Gestation crates (aka “sow stalls”) are metal cages, essentially the size of a pig, with concrete or slatted floors. In these crates, animals are unable to turn around or even stand up without difficulty. These devices are used to confine pregnant pigs, who are typically transferred to farrowing crates to give birth and are kept in them until their piglets are taken away. Farrowing crates are fundamentally the same as gestation crates, except that they contain small side compartments for piglets.