More than two years after the University Grants Commission (UGC) – the apex regulatory body for higher education in India – published official recommendations calling for an end to animal dissection and animal experimentation in university and college zoology and life-sciences courses in a phased manner, it has finally taken some action to ensure compliance by sending a letter to universities. 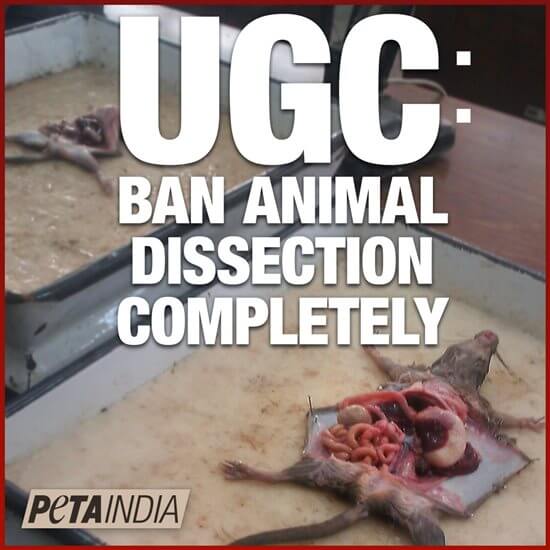 The step was taken after numerous appeals from PETA India and MP Maneka Gandhi to the UGC to stop animal dissections and ensure compliance with guidelines issued by the Ministry of Environment and Forests (MoEF) in January 2012, which call for the UGC to direct learning institutions registered under it to use alternatives to animals in anatomy and other courses and to ban dissection in pharmacy and life-sciences courses at the undergraduate and postgraduate levels.

Instead, the UGC has written to universities seeking compliance with the guidelines it issued in 2011, which state that although undergraduate students should no longer be required to dissect animals, professors may dissect one animal for demonstration purposes and dissection is optional for postgraduate students. Although these changes represent progress, PETA India has pointed out that the UGC’s recommendations fall short of those made by the MoEF in 2012, which aim to eliminate animal dissection entirely.

Because of the cruelty to animals inherent in dissection, it can deter students from continuing with their studies in the sciences. Research has shown that a significant number of students at every educational level are uncomfortable with the use of animals in dissection and experimentation, and some even turn away from scientific careers rather than violating their principles.

While PETA is pleased about the UGC’s step towards cracking down on animal dissection, until the commission ends animal dissection in every classroom, it is doing students a huge disservice.

Urge the UGC to end the use of animals for dissection in the country’s university classrooms completely by writing to Prof. Ved Prakash at [email protected].