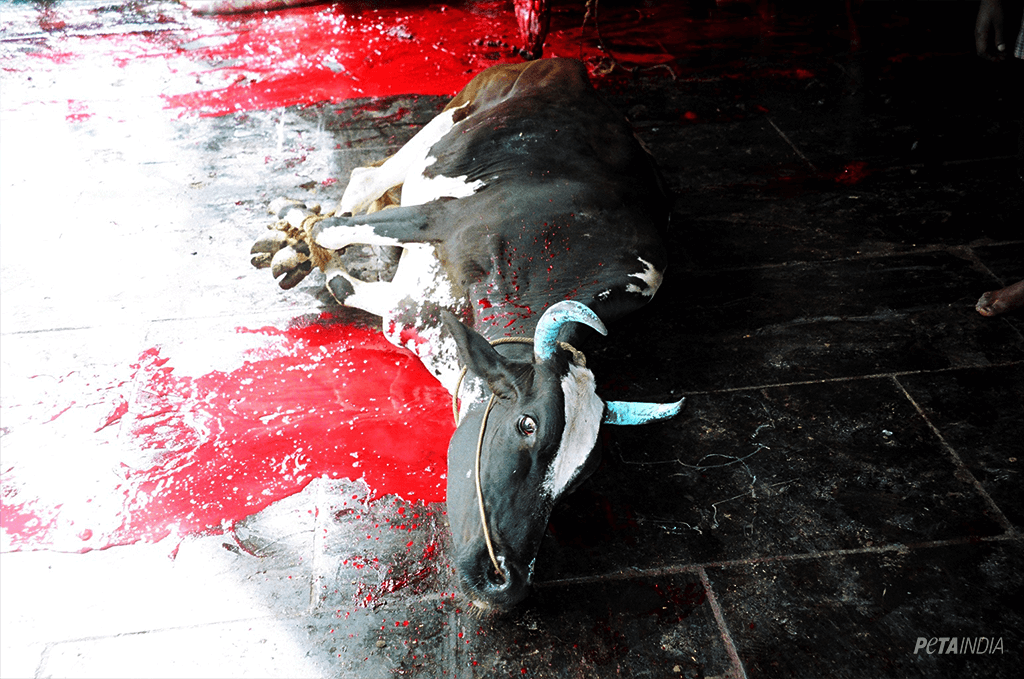 PETA India welcomed initiatives taken by the governments of Bihar, Madhya Pradesh, Chhattisgarh, Jharkhand, Uttarakhand, Uttar Pradesh, and Rajasthan to shut down illegal slaughterhouses – and it fired off a letter to all other states and union territories urging them to follow suit, which means closing down slaughterhouses that aren’t licensed by appropriate authorities and that use cruel practices which are prohibited by law.

The 17 February 2017 order of the Supreme Court states that the compendium of Indian acts and rules prepared by the government of India must be complied with by the state governments and union territories. Previously, PETA India wrote to the central government and all state governments and union territories urging them immediately to implement the provisions of the Food Safety and Standards (Licensing and Registration of Food Businesses) Regulations, 2011, pertaining to establishment and functioning of slaughterhouses as well as those of the Central Motor Vehicles (Eleventh Amendment) Rules, 2015, which provides special requirements for motor vehicles that transport animals used for meat and leather. Yet most slaughterhouses in the country remain unregistered.

Between 2004 and 2017, PETA India was part of a Supreme Court case against the common illegal treatment of animals during transport and slaughter, which the group has extensively documented. In addition to ordering a crackdown on illegal slaughterhouses, the court called upon states to set up enforcement committees to monitor the treatment of animals used for meat and leather. However, most states and union territories had failed to report back to the court that they took substantial action.

In August 2016, a surprise inspection of the Ghazipur slaughterhouse in Delhi by the Mayor of the East Delhi Municipal Corporation –which PETA India and People for Animals were present for – found huge atrocities, showing unlawful cruelty is common even at so-called modern facilities. Stunning, a legally-required facility that renders animals unconscious, was not being carried out on sheep or buffaloes before their throats were slit. Buffaloes were electrocuted by placing live wires on them before slitting their throats and hoisting their bodies onto hooks while they were still conscious.

PETA India seeks to remind the public that the beef industry is connected to the dairy industry, as the dairy industry is a key supplier of animals to the beef industry – and we urge the public to help end this trade by going dairy-free. Male calves, considered worthless by the dairy industry, are left to starve, abandoned, or are sent to be slaughtered. When they’re no longer useful for milk, females are typically sent to be killed as well. In defiance of the law, many animals slated for slaughter are crammed into severely crowded trucks, which routinely cause suffocation and broken bones. Others are marched to the slaughterhouse, and along the way, handlers break their tails and smear chili pepper and tobacco into their eyes to keep them moving. At the slaughterhouse, they typically have their throats slit in full view of each other, which too is a violation of law.

It’s been estimated that there are more than 30,000 illegal, unlicensed slaughterhouses in India. Although cruelty to animals is also rampant in licensed facilities, to make matters worse, the leather industry has no system in place to ensure that its skins are not obtained from illegal slaughterhouses.

PETA India reminds consumers that raising and killing animals for food and leather is a leading cause of water pollution, land degradation, and the greenhouse-gas emissions that are responsible for climate change. In addition, the consumption of meat, eggs, and dairy foods contributes to heart disease, strokes, diabetes, cancer, and obesity.