Malaika Arora knows what it’s like to carry a full load: She dances, models and acts and is also a television presenter. Malaika chooses to work, but the horses who are forced to pull carriages full of people on Mumbai’s hectic streets are enslaved. That’s why she is teaming up with PETA in a head-turning new ad asking fans to have a heart and help horses by saying no to horse-drawn carriage rides. Top photographer Abhay Singh shot Malaika’s ad during a spread she did for Maxim India, and the magazine was kind enough to allow us to use it to help animals. 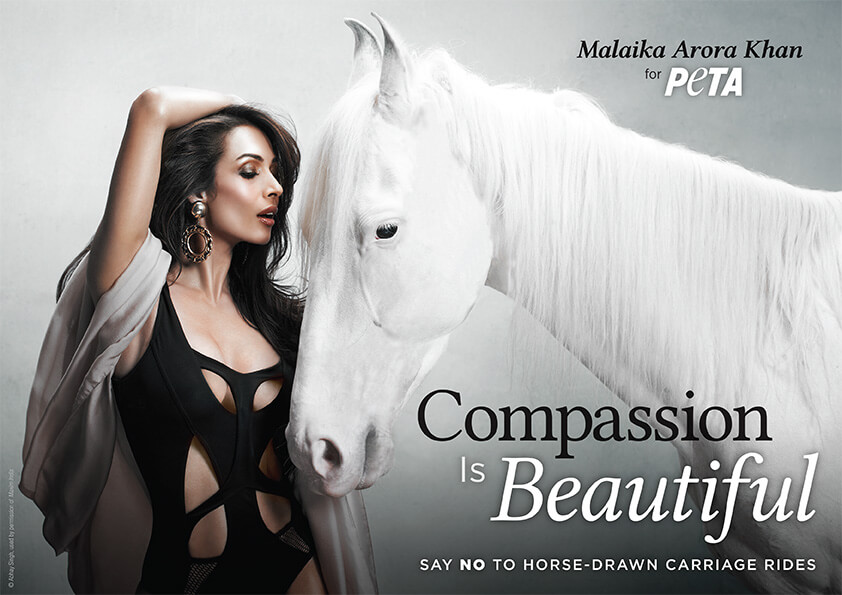 After finding out about PETA’s investigations into Mumbai’s horse-drawn carriages – which revealed that horses are commonly malnourished and denied water, suffer from painful foot and leg conditions, and are fitted with spiked bits which cause their mouths to bleed – Malaika felt that she had to take action. Drivers even try to hide their horses’ injuries with lime mortar, which is an irritant. Exhausted horses collapse and become victims of traffic accidents, endangering everyone on the road.

Take a cue from Malaika: “By choosing other forms of transportation, everyone has the power to spare horses the misery of being forced to work past the point of exhaustion”. Don’t ride in horse-drawn carriages.

You can help horses.

Urge the Maharashtra government to present its plan for the rehabilitation of the carriage owners and drivers so that horse carriages can finally be removed from Mumbai’s streets.