With her “skin” peeled back and her “internal organs” exposed, a PETA India volunteer stood in front of a stark animal-dissection table with a message for the public: “Try to Relate to Their Fate”. The gutsy demonstration, timed to coincide with World Week for Animals in Laboratories, urged passers-by to denounce cruel and archaic animal dissection and to report any cases of it in schools and universities to PETA India. 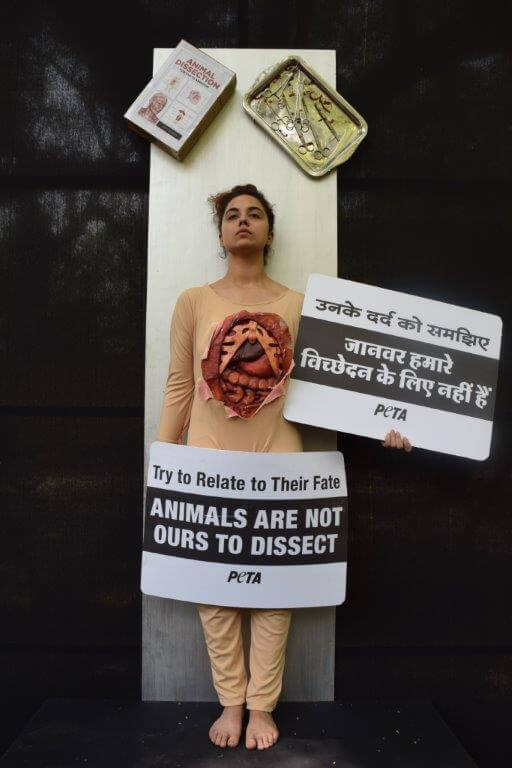 PETA India notes that although the then Ministry of Environment and Forests issued guidelines to higher education authorities in 2012 instructing them not to permit dissection and experimentation on animals in student training, we continue to receive complaints from distressed students who are being forced to watch or take part in dissection lessons.

Every year, tens of millions of animals are carved apart in classrooms around the world. Their formaldehyde-preserved bodies are sent to students’ scalpels from various places: foetal piglets are cut from the wombs of mother pigs killed in slaughterhouses, homeless cats are often rounded up by biological supply houses, and frogs are stolen from the wild – a practice that wreaks havoc on local ecosystems. Studies have repeatedly shown that students learn better from using humane, digital dissection alternatives such as Pro Dissector Frog, Bio Lab Frog, and Digi Frog than from cutting up dead animals.