Attitudes towards elephants are evolving. Governments, businesses, and the public are realising that these magnificent animals deserve protection and respect, not imprisonment and abuse. More than 100 travel companies and travel-book publishers have ended promotions of captive-elephant attractions.

However, the Kerala Forest and Wildlife Department has assigned a committee to test a new torture device invented in order to control elephants used for performances from as far as 75 feet away. The committee will test it on 10 male elephants in Thrissur, Kerala. The cruel contraption uses a nylon belt fitted with a remote-controlled device that tightens around an elephant’s legs at the press of a button, locking the animal firmly in place. This barbaric test, which would cause tremendous stress to a protected wild animal, is grotesque and must be stopped. 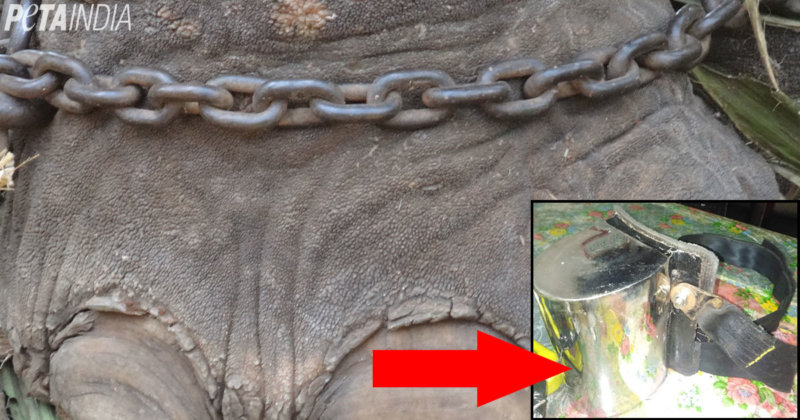 The location of these vicious tests is especially disturbing, as Kerala’s Thrissur Pooram festival is already a nightmare for elephants. PETA India’s investigation found that the festival forced elephants suffering from partial blindness, open wounds, painful abscesses, and lameness to participate. Mahouts beat them with crude weapons, exposed them to chaotic drumming and fireworks, forced them to stand and walk on hot tar roads, and denied them access to drinking water and shade. Many elephants were hobbled with heavy chains that severely restricted their movement, and as many as 134 elephants are being held in Kerala without valid ownership certificates.

The animals’ captors commonly use violence to oppress and control them for religious processions and festivals, joyrides, and other performances. Mahouts routinely beat and jab elephants forced to give joyrides with iron-tipped wooden sticks, spiked chains, and ankuses (rods with a sharp metal hook) and even pierce their sensitive ears and drill holes into their tusks. Elephants held captive in temples are also controlled with violence, fed unsuitable food, and denied veterinary care, and they display signs of severe psychological distress through unnatural swaying, weaving, and bobbing of their heads. Captive elephants often suffer from foot problems and arthritis from constant chaining and standing on hard surfaces, and they even die prematurely.

Say “no” to torturing and abusing our national heritage animal by signing PETA India’s “Ban All Elephant Performances” action alert today. You can also help elephants by refusing to support their captors: don’t buy tickets to circuses, festivals, zoos, ride operators, or any other establishments that exploit them.