With Valentine’s Day just around the corner, images of red and pink hearts are popping up everywhere. And while these romantic symbols are fun to celebrate, they’re also an important reminder to take care of our physical hearts, which thrive when we fuel our bodies with fruits, vegetables, pulses, grains, and other vegan foods. So make this Valentine’s Day extra special by nurturing your emotional and physical heart with healthy, tasty vegan foods. 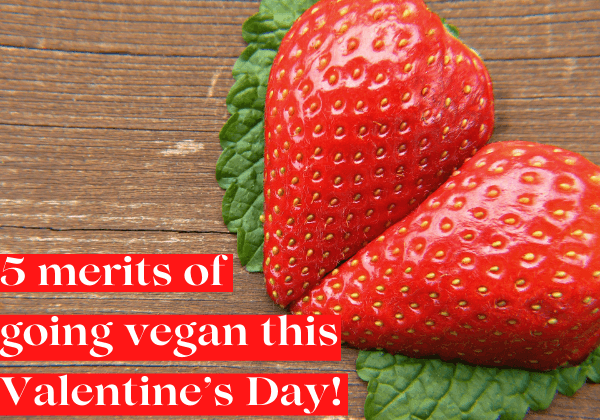 Vegans Are More Empathetic Than Meat-Eaters

Researchers have found that vegans are more empathetic than meat-eaters. That may be why vegans are considered a more intriguing romantic prospect – and why more people than ever are choosing to go vegan and spare the lives of nearly 200 animals a year, including cows on dairy farms, whose calves are taken away from them shortly after birth so that their milk can be sold for human consumption instead.

Athletes, coaches, nutritionists, and many other health influencers are showing the world one bite, biceps, and marathon at a time that eating vegan food is an excellent way to improve one’s health and take things to the next level.

Because meat clogs the arteries going to all the organs, an early sign of life-threatening heart problems is erectile dysfunction. Unsurprisingly, then, a 5,000-person survey conducted by Veggly, a dating app for vegetarians and vegans, revealed that 67% of vegans say they experienced a noticeable increase in sexual performance and enjoyment after ditching animal-derived foods.

Eating meat doesn’t just hurt animals – it hurts humans, too. It takes quite a lot of crops and water to raise farmed animals. In fact, it takes up to 6 kilograms of grain to produce just 500 grams of animal flesh! All that plant food could be used much more efficiently if people just ate it directly. The more people who go vegan, the better able we’ll be to feed the hungry.

Vegans Are Better Partners to the Environment

Going vegan is the most effective way to reduce your environmental impact. A report by the United Nations found that animal-based agriculture is responsible for nearly one-fifth of all human-induced greenhouse-gas emissions , and University of Oxford researchers found that ditching meat and dairy can reduce a person’s carbon footprint from food by 73%.

Vegans have the biggest hearts of all, and caring about animals, the planet, and one’s health is irresistibly attractive. So get in the mood for love and health and have a vegan Valentine’s Day.