PETA India has got people talking. Through our bold, thought-provoking demonstrations, we inch closer towards our goal of ending speciesism. Here are our five best demos from 2022.

Going vegan means a life of kindness and compassion and saving the planet. PETA founder and President Ingrid Newkirk took a public shower at Horniman Circle to highlight the troubling ways in which the meat industry contributes to the climate catastrophe. Modern meat and dairy production require up to 50 times more water than the production of plant foods such as pulses, vegetables, and grains. Ingrid’s shower curtain read, “1 Chicken Meal = 30 Showers. Go Vegan to End World Drought!”

Why is PETA founder @IngridNewkirk showering in the middle of a sidewalk in Mumbai?

She’s pulling back the shower curtain on how the meat industry is destroying our planet.#GoVegan #GoVeg @peta pic.twitter.com/4f6asZh9dJ

A PETA India member played the part of an animal used for laboratory experiments to show how these sentient beings are abused and killed – caged, shackled, force-fed chemicals, and electrocuted. Not only are these tests cruel, they also don’t help humans, as our bodies are biologically different from those of other species. 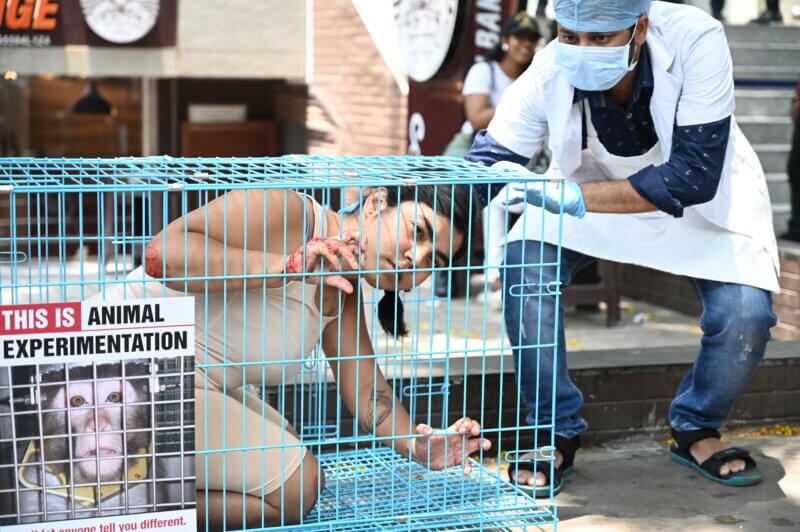 Just in time for Halloween, a trio of our supporters dressed as Grim Reapers rose up from the underworld to remind people of the horrors of leather production. Slaughterhouse workers cut cows’ throats in full view of other terrified cows, after which the animals are dismembered and skinned, often while they’re still conscious. Luckily, many cruelty-free vegan clothing options are available. 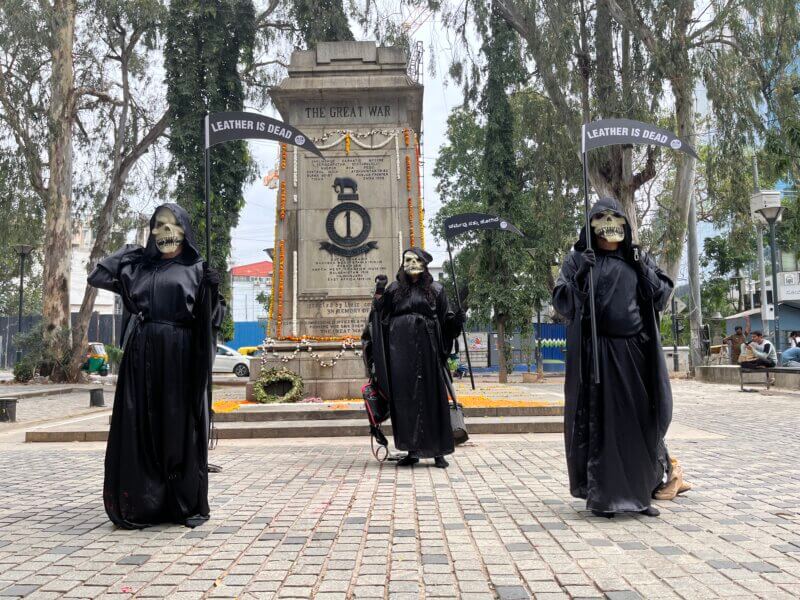 A “bloodied and charred” PETA India supporter was “barbequed” on a charcoal grill. The imagery was shocking, but this is the reality for animals used for food. Chickens’ throats are cut while they’re still conscious, cows are forcibly separated from their calves, piglets are castrated without painkillers, and fish are cut open while they’re still alive. Go vegan and help end animal suffering.

“Everybody Is Somebody’s Baby: Go Leather-Free.” This is the sign a PETA India member held up as she wore a coat adorned with the limbs of baby dolls. We wouldn’t wear a jacket made from the skins of humans – and using animals’ bodies to make a coat is just as wrong. Animals used for clothing feel physical pain and emotional suffering, just as we do. 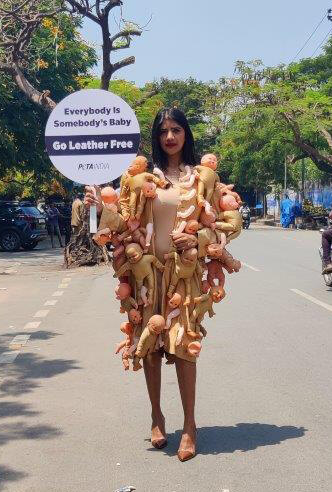 All sentient beings deserve respect and a good quality of life. Animals are not ours to experiment on, eat, wear, use for entertainment, or abuse in any other way.