Today, award-winning actor Richa Chadda shimmered as a mermaid, relaxing against an ocean backdrop and surrounded by sand at Mehboob Studios during a shoot for PETA India’s pro-vegetarian campaign in which she asks people to put themselves in the place of fish before putting fish flesh on their plates. Chadda’s hair-styling and make-up were done by Sandhya Shekar, and her outfit was designed and styled by StyleCracker.com. Keep an eye out for the pro-vegetarian ad campaign shot by ace photographer Rohan Shrestha.

“Fish have the same capacity to suffer and feel pain as dogs and cats have, and they do not want to die”, Chadda says. “If you love animals, the best thing you can do is not eat them.” 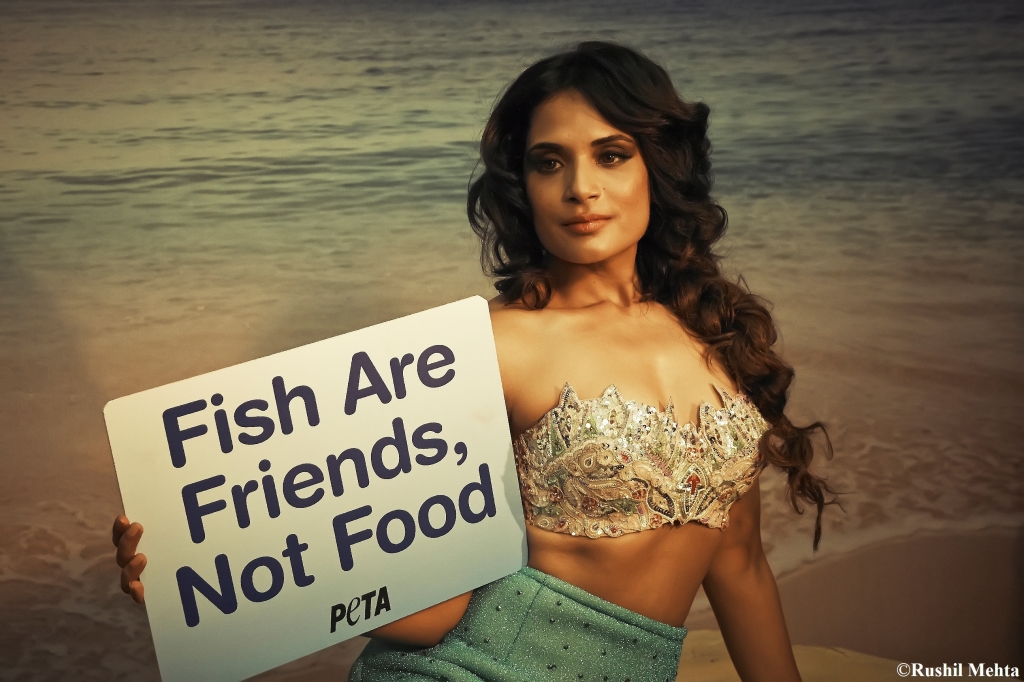 Scientific studies confirm what marine biologists have been saying for years: fish feel pain, just as all animals do. An issue of the US publication Fish and Fisheries cited more than 500 research papers on fish intelligence. The papers show that fish have impressive long-term memories and sophisticated social structures. An Oxford University scientist published research proving that fish learn faster than dogs, and University of Edinburgh biologist Culum Brown says, “In many areas, such as memory, [fish’s] cognitive powers match or exceed those of ‘higher’ vertebrates, including nonhuman primates”.

Fish used for food can be impaled, crushed, suffocated or gutted, all while still conscious.

Let your friends and family know that fish are friends, not food, and urge them to pledge to go veg today.

Here’s a delish faux-fish curry recipe to help them get started.