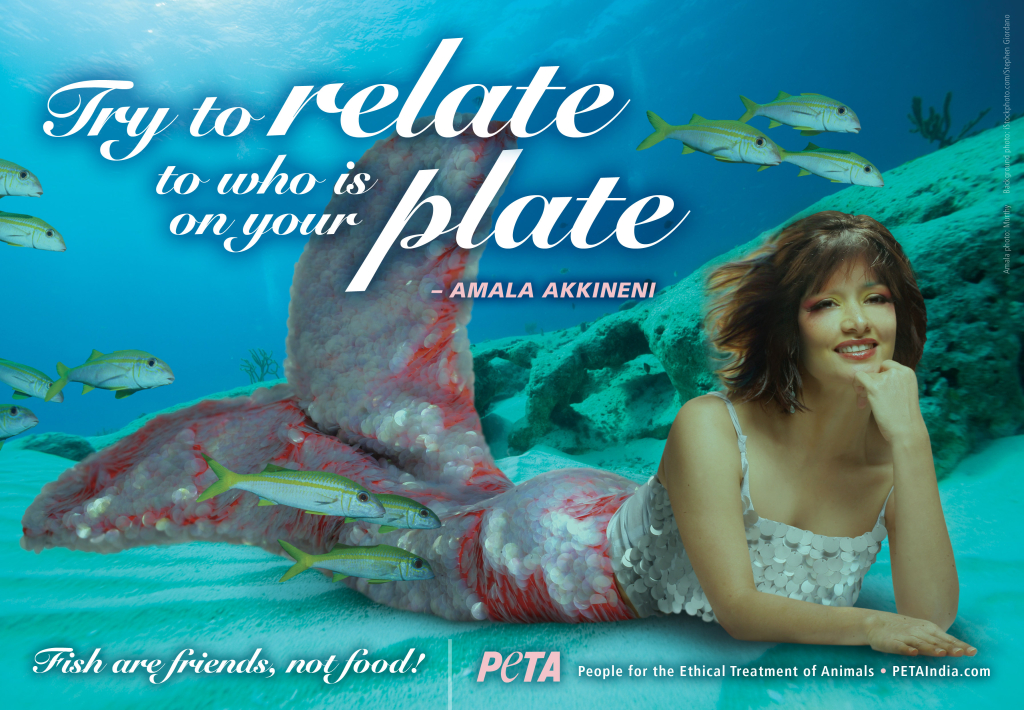 She has melted hearts in Tollywood hits like Nirnayam and Shiva and inspired compassionate people by founding the Blue Cross of Hyderabad, and now Amala Akkineni aims to move people to show consideration for aquatic animals by posing for an eye-catching PETA pro-fish advertisement, dressed as a mermaid. A long-time vegetarian and friend to animals, Amala urges fish-eaters, “Try to relate to who is on your plate”. PETA and Amala hope that the ad will prompt Indians to think twice before eating our finny friends. Although they look very different from us, fish are actually communicative and sensitive animals, and they suffer when they are hooked, smothered or stabbed, just as we would. A PETA investigation into India’s fishing industry – the third largest in the world – found conditions as cruel as those on factory farms or in slaughterhouses. On commercial fishing boats, terrified animals may be impaled, crushed, suffocated and gutted, all while still conscious. Farmed fish are crowded into unhygienic, cramped ponds, causing many fish to become infected with miserable skin diseases. In filthy local markets, fish struggle for life on shallow trays with very little water until the moment they are bloodily slaughtered in the open. Every fish in the market or on a menu suffered and died cruelly. But we can avoid contributing to their misery by choosing vegetarian foods instead – and, as an extra reward, you will be helping your health and our environment at the same time. Are you a friend to fish like Amala is? Then sign our pledge never to eat fish again!