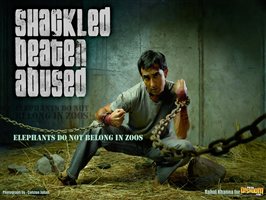 Posing next to the tagline “Shackled, Beaten, Abused – Elephants Do Not Belong in Zoos”, actor Rahul Khanna stars in a new ad for petaDishoom. In the ad, Rahul appears in chains, with bruises painted all over his body. The ad was shot by top photographer Colston Julian.

Why is Rahul speaking up for elephants living in captivity? Laxmi, an elephant in Mumbai, died after being hit by a speeding tanker. Because proper medical attention could not be provided, Laxmi suffered from a broken leg and spinal injuries for a day before she died. Another elephant in Mumbai was frightened by a firecracker and fell on a car. The mahout fled the scene, and the elephant rampaged. According to media reports, an entire platoon of State Reserve Police Force and 60 police personnel were called in to subdue her.

An elephant requires almost 200 kilograms of food – and more than 150 litres of water – every day, yet many people who own elephants openly admit that they cannot afford to feed the animals this much food. Elephants’ feet are not equipped to walk on tarred roads, yet elephants living in captivity are often forced to spend the entire day – and much of the night – walking on such roads. Elephants in cities cause traffic obstructions and pose a threat to the general public. Mahouts use elephants for begging and have even used elephants to intimidate people in order to get money from them.

Elephants are social creatures, and in the wild, female elephants live in close-knit family groups. Elephants living in the wild spend about 18 hours a day walking, feeding, bathing in water holes and interacting with each other. They are intelligent and sensitive animals and are known to mourn the loss of relatives – just as humans do. Conditions in captivity fail to provide an interesting, stimulating and rewarding environment for elephants. In zoos and cities, animals are separated from their families as babies and sentenced to a lifetime of boredom, loneliness and even abuse. Zoos claim that they educate people and preserve species, but they rarely succeed on either count. Zoos present visitors with a distorted view of wildlife. Conditions in zoos cause many animals to engage in self-mutilation and other abnormal and self-destructive behaviours.

“Zoos cannot provide for the complex needs of the animals whom they hold captive”, says Rahul. “These majestic animals belong in the wild, but instead they are locked up like criminals – even though they’ve committed no crime. A more respectful way to observe these animals is through the fascinating wildlife programmes available to everyone on TV.”

Join Rahul in helping animals in zoos now by asking the Ministry of Environment & Forests to ban animals from being forced to perform in circuses. 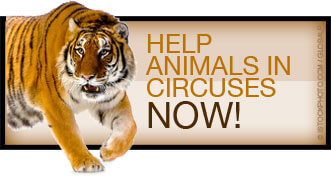