“Male calves are discarded like trash because they can’t produce milk. Go vegan.” That’s the sky-high message from PETA India, popping up in cities nationwide for World Vegan Month (November). The campaign calls attention to the common dairy-industry practices of separating calves from their mothers shortly after birth, then abandoning the males, allowing them to starve, or selling them to be killed for their flesh and skin since they cannot produce milk. Some dairies even use khalbacchas – stuffed dead calves hung or propped up on sticks – to try to trick mother cows and buffaloes into lactation. A Nagpur man was recently booked for this practice and other forms of cruelty to cattle. 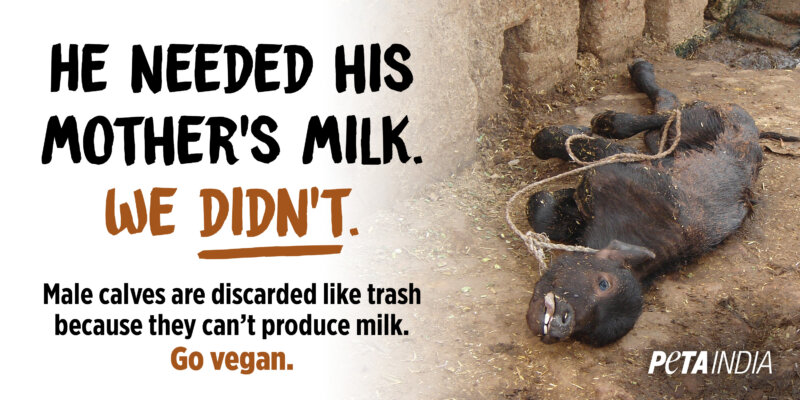 The dairy industry also supports the beef and leather industries, which are able to exist in India largely because the dairy sector supplies them with spent and unwanted animals. What’s more, University of Oxford researchers found going meat- and dairy-free can reduce an individual’s carbon footprint from food by up to 73%. And doctors tell us dairy consumption in humans is linked to heart disease, type 2 diabetes, certain types of cancer, and other ailments.