Bollywood’s Raveena Tandon recently took to Twitter to support PETA India’s plea for a vegan (wholly plant-based) Burger King in India, after news that the company is opening a meat-free location in Germany.

PETA India tweeted to Burger King India, “A Burger King in Germany is trying out being totally meat-free. How about a vegan Burger King in India, and to start with #Vegan Whoppers at least please @burgerkingindia?”

Tandon followed up by writing, “I’d love that @BurgerKing. A restaurant in Singapore only offers lab grown meat. No killing, no bloodshed, just edible material grown out of [a] single cell.” 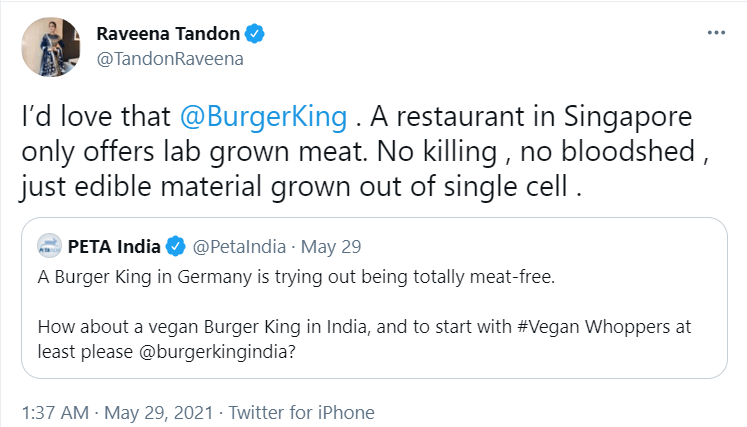 Recently, PETA India fired off letters to McDonald’s, KFC, and Burger King urging them to add vegan options to their menus in India, as they’re increasingly doing abroad. In 2018, Bollywood actor Sonu Sood joined many who had sent appeals to McDonald’s India via Twitter, retweeting a message in favour of introducing a vegan burger in India.

The consumption of meat, eggs, and dairy is responsible for animal suffering on a massive scale. Chickens’ throats are cut while the birds are still conscious, fish suffocate or are cut open while they’re still alive on the decks of fishing boats, and calves are taken away from their mothers shortly after birth.

Eating meat and other animal-derived foods is also devastating to human health. The consumption of these items has been linked to heart disease, strokes, diabetes, cancer, and obesity. Moreover, raising animals for food is a leading cause of water pollution and land degradation, and a United Nations report concluded that a global shift towards a vegan diet is necessary to combat the worst effects of climate change.

What’s more, the COVID-19 pandemic, bird flu, swine flu, Ebola, HIV, and numerous other zoonotic diseases are believed to have jumped the species barrier to humans at live-animal markets, on factory farms, at slaughterhouses, or at other places linked to killing animals for meat.