An eyewitness from Anonymous for Animal Rights visited major hatcheries as well as farms with chickens used for eggs (“layers”) and for meat (“broilers”) in Andhra Pradesh and Telangana linked to Diamond Group, Mulpuri Group, Sakku Group, SH Group, Skylark Hatcheries, SR Group, Sri Lakshmi Narasimha Poultry Farms Private Limited, Suguna Foods, and Venkateshwara Hatcheries Private Limited and provided PETA with the evidence that it had collected. Many of these companies are prominent names in the meat or egg industry, suggesting that the routine abuse that was documented is commonplace across the country. The cruelty included molesting and forcibly impregnating hens with the same syringe, cutting off chicks’ beaks with searing-hot blades, and packing so many birds into one cage they could hardly move. Not every type of abuse was documented on each farm, but massive cruelty was witnessed at every facility visited. Read the detailed report here.

Chicks on layer and broiler farms and in hatcheries are hatched in incubators and never get to meet their mothers. Instead, farmers force those to be used for their eggs into the same vicious cycle of egg laying and slaughter just like their mothers and grandmothers. Once workers separate female chicks from the males – who are deemed “worthless” by the egg industry and violently killed – they use hot blades to sear off a portion of the birds’ beaks. This is done to prevent the hens from injuring each other, because farmers stuff so many into a single cage that they become frustrated from the crowding. The hens to be used for breeding are yanked out of their filthy, crowded cages to be artificially inseminated, using the same syringe for all the birds, and then stuffed back into their tiny, wire prisons. These intelligent, sensitive mothers never get to nurture their young, breathe fresh air, or forage for food.

This video shows the life of exploitation, assault, and suffering experienced by hens in the meat and egg industries:

The egg and meat industries don’t let hens mate naturally. Instead, workers assault the male chickens, forcing them to produce semen and routinely violate hens with unhygienic equipment. At Diamond Group’s broiler farm, workers didn’t wear gloves when they roughly extracted semen from males or when they forcibly dragged hens out of their packed wire cages and injected them with semen using the same syringe. Afterward, the terrified hens were shoved back into the waste-encrusted enclosures that were full of suffering birds. This cruel and violent process was repeated over and over until every hen had been violated. 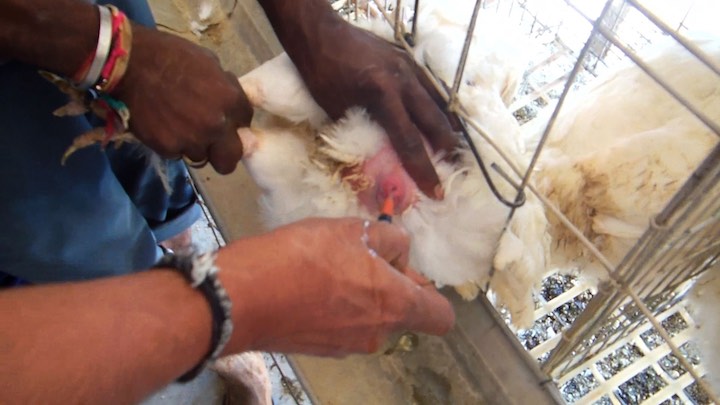 Denied the Opportunity to Incubate, Raise, or Even Meet Their Young

Even though hens can communicate with their unhatched chicks, those in the egg and meat industries never get to incubate their young, let alone bond with them. Instead, the eggs are incubated in large mechanical incubators. But barring hens from naturally incubating their young interferes with the chicks’ development. At SR Group’s broiler hatchery, the mechanical incubators reached such high temperatures that the investigator saw organs protruding out of chicks’ bodies. Sakku Group’s large-scale commercial incubators have automatic backup systems and are manually controlled by company officers, but, according to workers, temperatures still surge and cause deformities in the chicks, whom workers then kill in barbaric ways.

Hens are forced to spend their lives confined to tiny wire “battery” cages that are covered with faeces and so restrictive that the birds can’t even stretch a single wing. These habitually clean animals have no choice but to urinate and defecate on each other, which creates ideal conditions for disease to run rampant. To address hygiene issues and prevent disease, farmers usually pump hens full of antibiotics. At Mulpuri Group’s layer farm, the eyewitness observed nine hens packed into a single cage. Whenever a worker approached or reached a hand into a cage, the hens panicked and became visibly distressed.

The wire of battery cages rubs off hens’ feathers, chafes their skin, and cripples their feet. At Sri Lakshmi Narasimha’s farm, the eyewitness documented wounded hens with eye and skin infections, hair loss, and swollen body parts packed into metal cages with no room to stand amid the piles of excrement. Many hens die daily, and farmers often simply leave the dead bodies in the cages, forcing the rest of the traumatised birds to co-exist with the carcasses.

At Sakku Group’s egg farm, the eyewitness saw a group of 40-week-old chickens going through “forced moulting”, which is a cruel technique that typically involves starving hens in order to shock their bodies into another egg-laying cycle. Many hens lose their feathers and much of their bodyweight, and some even die. The birds at this farm had heavily soiled feathers, and they were climbing on top of each other and fighting. In 2011, the Animal Welfare Board of India ordered all poultry farms in India to stop engaging in forced moulting immediately, stating that the practice violates India’s Prevention of Cruelty to Animals Act, 1960, and is a punishable offence. 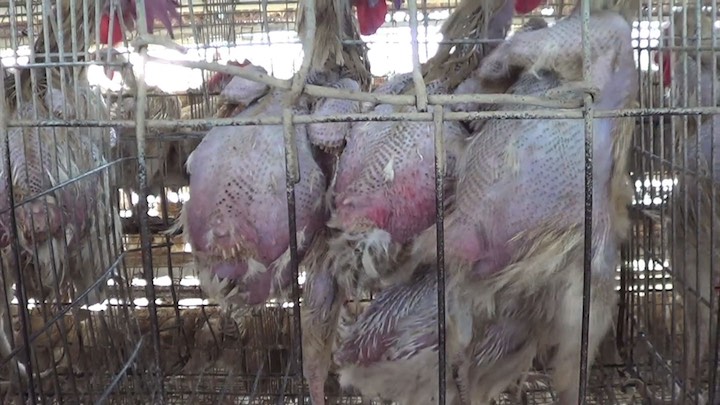 Please add your voice to our effort to help them by signing the appeal below, which will be collected and sent to the Minister of Fisheries, Animal Husbandry and Dairying.

I am deeply disturbed and saddened at hearing about the plight of hens used for their eggs in India. This sort of systemic violence and torture should not be inflicted upon any species.

Hens are locked into inhumanely small, crowded battery cages where they can’t even spread a wing and often peck at one another out of sheer frustration. Egg facilities often starve hens to shock them into another laying cycle, and male chicks, who are considered undesirable by the egg industry, along with other unwanted chicks are cruelly killed by methods such as drowning, burning, and crushing. When their egg production wanes, the hens are thrown into trucks and driven to slaughterhouses, where they’re killed in full view of their companions.

These animals desperately need your help. I ask you to use your authority to require that the provisions of The Prevention of Cruelty to Animals (PCA) Act, 1960, and sections 428 and 429 of the Indian Penal Code are enforced to take action against illegal killing of chicks. At the very least, I request that in ovo sexing technology – which can identify eggs with male embryos at an early stage of development, thus sparing chicks a horrific death – be implemented in India.

I also sincerely plead with you to urge egg companies to heed the 16 February 2012 circular issued by the Animal Welfare Board of India (AWBI), which clearly states that confining hens to battery cages violates Section 11(1)(e) of the PCA Act, 1960.

As part of providing the birds with more space, please stop debeaking. It’s an apparent violation of Sections 3 and 11(1)(l) of the PCA Act, 1960.

Also, I ask that egg companies be required to heed the AWBI advisory dated 9 March 2011, which states that depriving hens of feed for several days amounts to cruelty to animals under the PCA Act, 1960, and is therefore a punishable offence.

No one deserves to be tortured, mutilated, and abused – so please ensure that hens and chicks don’t suffer in this manner.