On 17 January 2023, PETA India placed several damning reports before the Honourable Calcutta High Court demonstrating that the conditions of the horses used to pull tourist carriages in the city continue to deteriorate, the horses are legally unfit to work, and the housing used for the horses is illegal. Numerous carriages, horses, and drivers also lack the requisite licences and registrations. 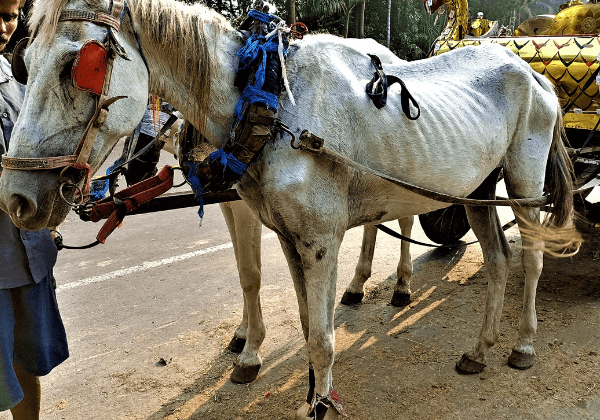 Pursuant to the court’s previous instructions, the representative for petitioners PETA India and CAPE Foundation, equine veterinary expert Dr Naresh Chandra Upreti, attended two health camps organised by the Animal Resources Development Department (ARDD) on 20 October 2022 and 21 December 2022. Dr Upreti prepared detailed reports of his observations. The reports establish that at least 90% of the horses had a very poor body condition score, as they were thin, weak, and debilitated; at least 75% of the horses had brushing lesions on either of the forelegs; at least 95% of the horses had swelling in one or both the hind legs’ flexor tendons and fetlock joints; and at least 75% of the animals showed abnormalities in the shape of one or both hind hooves. Some of the horses observed were also visually impaired. Dr Upreti explained that these leg conditions are irreversible and caused by constantly standing and working on concrete.

In addition, the reports also demonstrate that the ARDD observed horses only superficially, its veterinarian was neither an equine expert nor adequately trained in welfare issues regarding horses, its inventory lacked suitable medication, and in most instances, its veterinarian prescribed medication without performing a clinical examination.

PETA India also recently conducted an investigation into sites used for tethering or housing horses used to haul carriages and found that they did not meet the licensing requirements under the Kolkata Municipal Corporation Act, 1980. The investigation further revealed that the horses were tethered for many hours on dangerous, uneven flooring and forced to live in their own waste, conditions that risk outbreaks of infectious diseases like tetanus and glanders, which can be transferred to humans.

Numerous previous assessment reports by PETA India veterinary inspectors also established that the more than 100 horses used for rides in the city are anaemic; have suffered from severe injuries, including bone fractures; and are forced to live in filthy conditions, posing a public health risk.

Using injured and malnourished horses for carriage rides violates The Prevention of Cruelty to Animals Act, 1960. In addition, the Calcutta Hackney-Carriage Act, 1919, requires horse-drawn carriages, horses, and drivers, to be licensed by the police. Failure to obtain such requisite registration and licences are violations of law.

PETA India has compiled a factsheet of numerous road accidents in Kolkata involving these horses, illustrating the dangers of using them to haul tourists. Such accidents cause the animals pain and suffering and pose safety risks to the passengers in the carriages and commuters.

Help Us End the Plight of Kolkata’s Horses