Gestation crates (aka “sow stalls”) are metal cages essentially the size of a pig, with concrete or slatted floors that leave the animals unable to turn around or even stand up without difficulty. They’re used to confine pregnant pigs, who are typically transferred to farrowing crates to give birth and are kept in them until their piglets are taken away. Farrowing crates are fundamentally the same as gestation crates, except that they contain small side compartments for piglets. 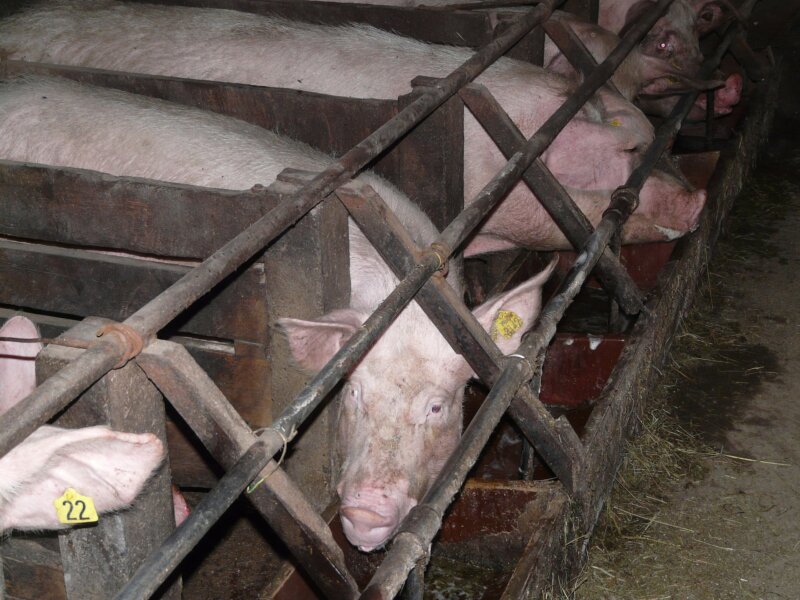 Glue traps are usually made of plastic trays or sheets of cardboard covered with strong glue. They are indiscriminate killers, often catching non-target animals – including birds, squirrels, reptiles, and frogs. Mice, rats, and other animals caught in these traps can die of starvation, dehydration, or exposure after days of prolonged suffering. Others may suffocate when their noses and mouths become stuck in the glue, while some even chew through their limbs in a desperate bid for freedom and die from blood loss. Those found alive may be thrown away along with the trap or may face an even more traumatic death, such as by bludgeoning or drowning.

Pigs are intelligent, social animals who should not be exploited, and the best way to control rodent populations is to make an area unattractive or inaccessible to them. This can be done by eliminating food sources, keeping surfaces and floors clean, storing food in chew-proof containers, sealing trash cans, and using ammonia-soaked cotton balls or rags to drive rodents away (they hate the smell.). After giving them a few days to leave, entry points can be sealed using foam sealant, steel wool, hardware cloth, or metal flashing. Rodents can also be removed using humane cage traps but must be released near where they were found – animals relocated outside their natural territory struggle to find adequate food, water, and shelter and can die as a result.

Learn How to Help an Animal in Distress Support Our Work