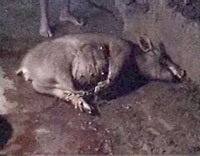 John Abraham watched this video footage of pigs who were illegally killed in the backyards of Goan homes. Deeply shocked and moved, Abraham fired off a letter to Pratap Sinh Rane, former chief minister of Goa, and urged him to take immediate action to stop this unlawful cruelty. Click here to read Abraham’s letter.

This video footage was sent to PETA India by horrified tourists. Killing pigs in backyards is a violation of the Prevention of Cruelty to Animals (Slaughter House) Rules, 2001, which makes it illegal to slaughter animals in facilities that are not specifically licensed as slaughterhouses.

As the video footage shows, pigs are haphazardly and repeatedly stabbed in the chest with a knife in front of other pigs as they scream in pain. Sometimes, they are dismembered while they are still conscious.

Did You Know?
Pigs are smarter than dogs and every bit as friendly, loyal and affectionate. When they are in their natural surroundings instead of on factory farms, pigs are social, playful, protective animals who bond with each other, make nests, relax in the sun and cool off in the mud. Pigs also dream, recognise their own names, play video games more effectively than some primates and lead social lives of a complexity previously observed only in primates. Learn more.

Write to Digambar Kamat, chief minister of Goa, and ask him to end the illegal slaughter of pigs in Goa.