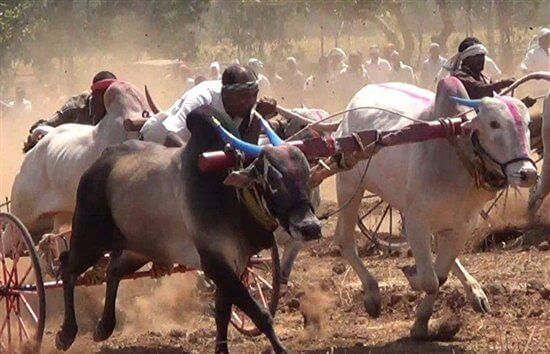 Driver biting the tail of bull to force him to run.

In February, PETA investigators attended bull races in Pusegaon and Phadtarwadi and observed bulls who had their tails bitten and twisted by human participants and who were beaten continuously in order to force them to run. Irritants were put into bulls’ mouths, and they were yanked by nose ropes, causing their noses to bleed. They were also forced to run and race even after they had collapsed.

Bulls are transported to these runs crammed in goods trucks. They are then tied without water or food in the scorching midday sun – with no shade – for up to six hours as they are made to wait to race.

Breaking Tails, Breaking the Law
When the bulls’ tails are twisted and bent, the pain caused is similar to what a human would feel if someone snapped one of our fingers. As if causing this pain were not enough, bulls’ tails were commonly bitten by the cart drivers and riders during the races. In some cases, the riders bit the bulls’ tails for several seconds at a time while the animals ran to try to get away from the pain.

The findings of our investigation clearly show that bulls who are used in races are subjected to extreme cruelty and unmitigated suffering and that participants apparently violate The Prevention of Cruelty to Animals Act, 1960, as well as a Supreme Court SLP Order directing that animals cannot be tortured or subjected to cruel treatment during races. 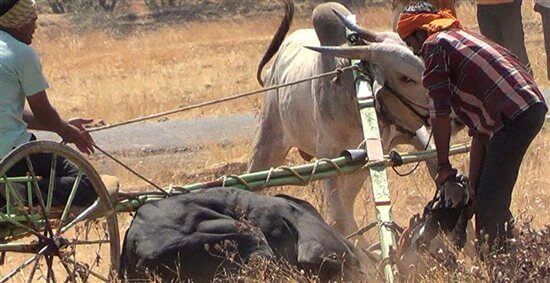 Bull racing is, however, inherently cruel, as forcing bulls to race involves agitating, frightening or hurting them. Regulations of any kind won’t negate the fundamental cruelty of deliberately tormenting bulls and forcing them to run. Bull races should be banned altogether.

People who care about animals should never participate in or even be spectators at a bull run. Put up a fight if you hear about bull-racing events in your area and e-mail us at [email protected] to let us know. We will work with you to try to stop it.