It’s not just human females who have historically been subjugated, oppressed, and abused and whose reproductive systems have been regulated and controlled. Other female animals have suffered many similar injustices – and they are still going on today. This International Women’s Day, let’s unite across the lines of race, religion, economic status, and species to advocate for an end to oppression for all of us.

Cows used by the dairy industry are repeatedly impregnated on what some workers abroad call “rape racks”, then their precious babies are torn away from them so that humans can drink the calves’ milk. Hens, too, are abused because they are female. They are crammed into cages so small they cannot spread a wing, their laying cycles are often manipulated, and they are slaughtered as soon as their egg production begins to wane, at about 18 months old. Meanwhile, many pregnant pigs are crammed into metal cages called gestation crates that are so narrow, they cannot turn around or even stand up without difficulty. 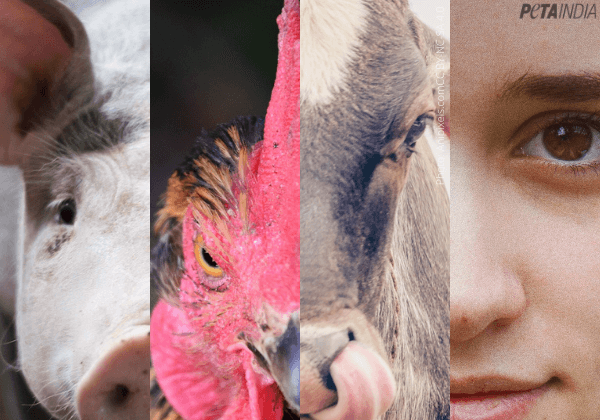 Every living, feeling being, regardless of species or gender, deserves to live free from subjugation and fear. But because of human prejudice, inquisitive, intelligent rabbits are tormented in laboratories; goats and other animals are hacked apart in slaughterhouses; are crammed onto severely crowded vehicles and transported to be killed for shoes; and dogs and cats are abandoned on the streets to fend for themselves.

Let’s stand up to the systematic abuse of females (and males) of all species.

Order our free vegan starter kit to help you begin your vegan journey, and be sure to share it with a friend or family member, too.