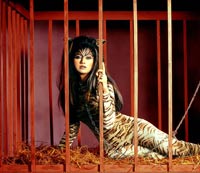 In a hot ad for petaDishoom, Shilpa Shetty – stripped down to stripes – crouches in a small cage with a look of despair on her face to depict the misery of animals used by circuses. Shot by ace photographer Atul Kasbekar, the ad encourages the actor’s legions of fans to boycott circuses with animal acts. Shilpa makes the case dressed in a figure-hugging bodysuit, her make-up compliments of glamour make-up artist Cory Walia.

Shilpa is reminding everyone who might be tempted to go to a circus that animals in circuses are cruelly abused, often inadequately fed and routinely beaten to make them obey commands for a few moments of  public amusement.

Shilpa and PETA India want people to know that circuses portray a distorted view of wildlife. In contrast to the glittery image the circus tries to project, the lives of animals who are forced to perform repetitious, meaningless and often painful tricks are miserable. Animals do not naturally ride bicycles, stand on their heads or jump through rings of fire, so circus handlers use whips, rods, electric shock prods and other cruel devices to train them. Animals in the circus work based on fear, knowing they will be hurt badly if they do not obey. Bears may have their noses broken during training or their paws burned to force them to stand and walk on their hind legs, and handlers hit their feet and toes if they do not “dance”. Even the animals’ access to basic necessities such as clean water, sufficient food and vital veterinary care is often ignored or severely limited.

Shilpa says, “By no means was I comfortable during the photo shoot crouched in that small cage. But what were a few fleeting moments of discomfort for me compared to what life must be like for the precious animals held captive in the circus? These once dignified animals only leave their cages, which are barely larger than the size of their bodies, for a few minutes each day to be forced into the ring to perform tricks which make no sense and are upsetting to them. The best way to help animals suffering in circuses is to boycott the circus”.

Using bears, monkeys, tigers, panthers and lions in circuses is not only cruel but also illegal – it is a violation of a 1998 Central Government notification, which was upheld in May 2001 by the Supreme Court. The notification specifically bans circus owners from training or exhibiting these five species, yet circuses throughout India continue to display these animals in direct contravention of the law.

The use of animals in entertainment has been restricted or banned in Sweden, Finland, Switzerland and Denmark, and in England, circuses with animal acts are often denied public space. Several local governments in the US have also banned exotic-animal acts, and if these places can move towards animal-free circuses, why can’t India?

Can’t get enough of Shilpa? Want the latest news on your other favourite Bollywood stars? There’s only one solution – sign up for the PETA India E-News today.