Today, International Women’s Day, PETA India is honoring Malayalam magazine Grihalakshmi with it’s 2018 Good Mother Award for highlighting the importance of human breast milk to infants’ health. The publication recently featured on its cover a photo of model Gilu Joseph in which she appears to breast-feed a baby.

"Don't stare, we are #breastfeeding!"

Grihalakshmi March 1st Issue is out, which speaks about the importance of breastfeeding, and the taboos revolving around it. pic.twitter.com/CtobpNInMO

“Mothers of each mammal species naturally produce the perfect food for their own babies, so human mothers who breastfeed can be proud of their innate ability to nourish their infants,” says PETA India spokesperson and vegan mother Neha Singh. “Often, when children are bottle-fed, they are given milk from cows or buffaloes, which is nature’s perfect food for calves but can cause health problems including allergic reactions, diarrhoea, and anaemia in human babies. Dairy formula may also be diluted with contaminated water, risking illness and even death. Helping human mothers feel good about breastfeeding their children enables them to be good mothers and keeps future generations healthy and strong!” 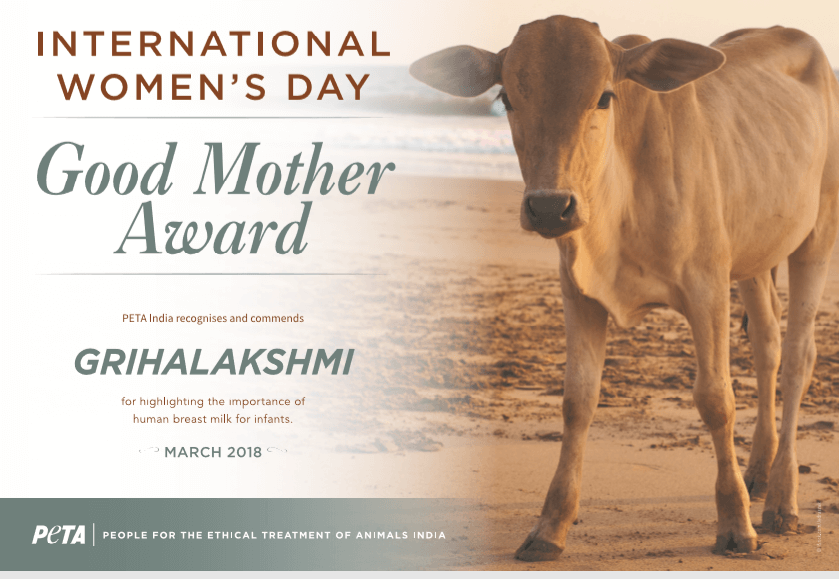 Human consumption of dairy “products” is linked to an increased risk of suffering from juvenile diabetes, allergies, obesity, heart disease, and cancer. Babies have difficulty digesting bovine milk, and drinking it can make them anaemic, while most adults lose their ability to digest milk altogether after infancy. Because of its health disadvantages, the late Dr Benjamin Spock, the world’s leading authority on child care, denounced feeding cows’ milk to children. What’s more, babies who are breastfed by mothers who drink cows’ milk may suffer from colic.

Supporting breastfeeding mothers can also help prevent animal mothers and their babies from suffering in the dairy industry. On today’s dairy farms, farmers repeatedly forcibly impregnate cows and buffaloes through traumatic artificial insemination – which is rape. They also commonly inject cattle with oxytocin to force them to let down more milk, causing them painful muscle contractions similar to those experienced during labour. And they typically tear calves away from their loving mothers shortly after birth so that humans can steal the milk that nature meant for them. If the babies are female, they are often fed milk replacer and will go on to be treated as milk machines themselves, just like their mothers. If they’re male, farmers generally abandon them, let them starve to death, or sell them to be reared for beef. When mother cows’ and buffaloes’ milk production wanes, they, too, are often sold for beef or abandoned, or they end up in severely crowded goshalas.

For more information on plant-based diets for children, visit this Physicians Committee for Responsible Medicine webpage.