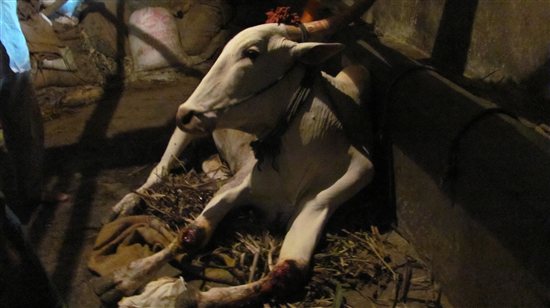 In August 2012, the Maharashtra Forest Minister ordered SWH Naqvi, Principal Chief Conservator of Forests (PCCF) for wildlife, Maharashtra, to move Sunder, the 13-year-old elephant who has been kept chained inside a dark shed at Jyotiba Temple for six years, to a wildlife rehabilitation centre identified by PETA. But the PCCF and temple authorities have not complied with this order or with the Central Zoo Authority’s recommendations for improving Sunder’s living conditions and have instead allowed Vinay Kore, a local member of the legislative assembly and the person who donated Sunder to the temple, to reportedly hide him in a dark, heavily guarded poultry shed near a dairy facility at Amrut Nagar (Warananagar), Kolhapur. In response, PETA India’s lawyer and India’s leading animal advocate, Raj Panjwani, has sent a legal notice to the PCCF, Jyotiba Temple authorities and Kore.

Sunder has been kept chained by temple authorities since 2007 and has scars covering his body, a severely injured eye that was likely caused by a beating and a hole in his ear that was caused by an ankus, an iron rod with a hook at the end. Constant physical and psychological abuse can cause captive Indian elephants to lash out, as Sunder did in August. He became violent and tore down a pillar as he tried to flee his handlers. He was subdued and returned to captivity.

The Forest Minister’s order came shortly after this incident as a result of a rigorous campaign led by PETA. Pamela Anderson and former Beatle Paul McCartney lent their support to the campaign by writing letters to government officials.