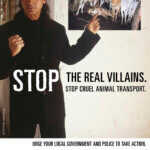 Famous Bollywood “bad man” Gulshan Grover stars in a new PETA India ad to speak out against animal abuse in the leather industry. Grover – who is best known for his chilling portrayal of villains in countless Bollywood movies – hopes to encourage Indian citizens to urge their local government and police to take action against illegal severe crowding and other abuses which animals suffer when they are transported to slaughter for leather exported to the West.

“I am a villain only on screen; however, there are real-life villains who treat animals badly”, says Grover. “I urge India’s citizens to help stop animals’ needless suffering by insisting that their local governments and police enforce laws against cruel transport and poor treatment of animals by truly bad men.”

Animals used by the leather industry are transported to states where they can legally be killed. Forced to walk through the heat and dust for days without food or water, many of the animals collapse. Cattle are pulled by ropes that are inserted through their noses. To keep the animals moving, handlers twist the cows’ necks, horns and tails or rub chilli peppers into the animals’ eyes.

At the abattoir, animals are commonly dragged inside and cut open with dull knives. The animals are often slaughtered in full view of one another, which is an illegal practise, and some animals are skinned and dismembered while they’re still conscious.

This is not the first time that Grover has teamed up with PETA India and raised his voice against the leather industry. In 2004, he shot an ad that showed cows jam-packed on a lorry on their way to slaughter. That same year, he starred in a PETA public service announcement, which was shot by renowned filmmaker Kailash Surendranath.

Want to know what you can do to help animals killed for their skins? You can start by pledging not to wear leather and encouraging your friends and family to boycott leather as well.

You can also fill out our simple form to write to the government and demand the closure of illegal slaughterhouses. 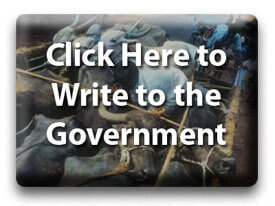