Are you eating someone’s period? If you eat eggs, you are. 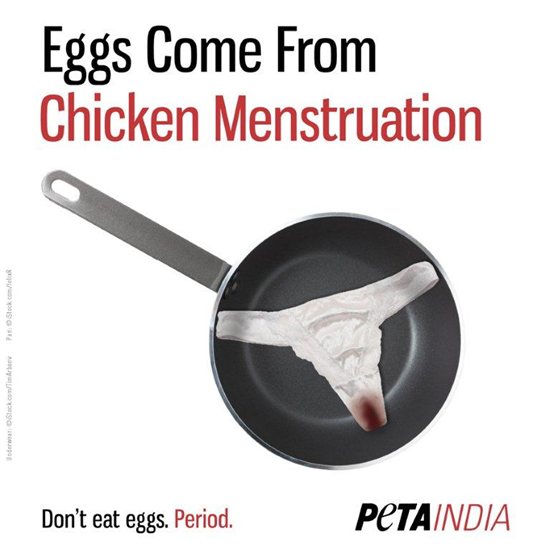 Female chickens have a menstrual cycle that can recur daily during certain times of the year. Like women, hens have ovaries. During a hen’s cycle, an ovary sends a yolk on its path. The yolk forms what we know as an “egg white” as it moves through the reproductive tract into the shell gland. The shell takes about 21 hours to form and then – “Cluck!” – out pops an egg! These are the eggs that make it onto store shelves and into frying pans.

Not only is eating a chicken’s period just plain gross, it’s also cruel. On factory farms, chickens are shoved into tiny wire “battery cages” and have large portions of their beaks cut off. They are crammed so close together that they are forced to urinate and defecate on one another. Many birds die, and the survivors are often forced to live with their dead and dying cage mates. Male chicks are considered worthless, so every year, millions of them are killed. They may be tossed into trash bags and left to suffocate or thrown into high-speed grinders while they are still alive!

Spread the word that eggs are chicken periods by sharing this ad with everyone you know, and pledge to go vegan!