This World Environment Day, 5 June, please encourage your friends and relatives to go vegan in order to help alleviate world hunger and save the environment. 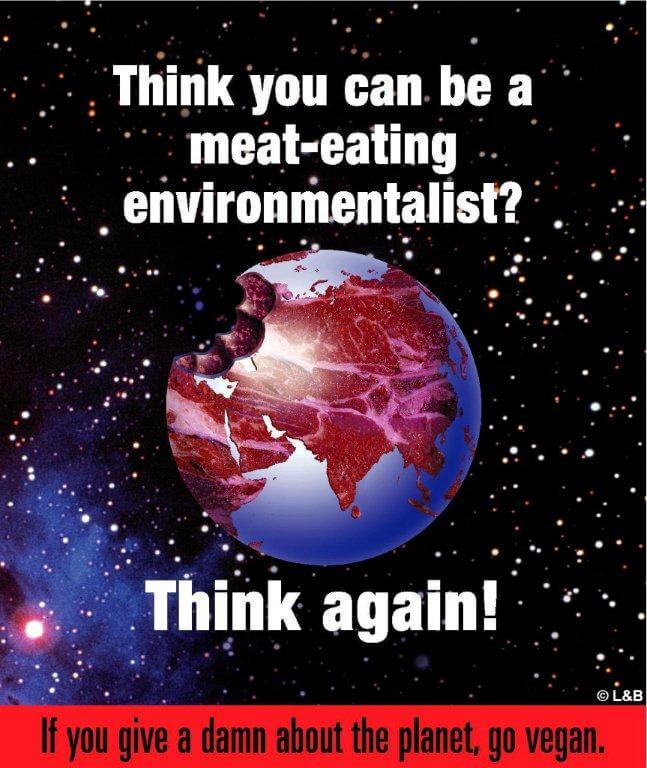 Here are just five reasons why it makes sense to opt for veggie burgers instead of hamburgers and chickpeas rather than chicken:

1. Meat Production Wastes Land and Grain
Raising animals for food is grossly inefficient, because while animals eat large quantities of grain, soybeans, oats and corn, they produce only comparatively small amounts of meat, dairy products or eggs in return.

2. Eating Meat Contributes to Climate Change
According to the Worldwatch Institute, at least 51 per cent of global greenhouse-gas emissions are caused by animal agriculture. Worldwatch president Robert Engelman says that the “world’s supersized appetite for meat” is one of the main reasons why greenhouse-gas emissions are still increasing rapidly.

3. The Meat Industry Drains Our Water Supply
Between watering the crops grown to feed farmed animals, providing billions of animals each year with drinking water and cleaning away the filth on factory farms, on trucks and in slaughterhouses, the farmed-animal industry places a serious strain on our water supply.

According to NationalGeographic.com, the average vegan indirectly consumes around 2,271 litres of water a day less than someone who eats a meat- and cheese-laden diet. That means you save 829,000 litres of water a year just by going vegan!

4. Factory Farm Runoff Is Ruining Our Waterways
Cows, chickens, pigs and other farmed animals produce 16.6 billion tons of excrement a year. That’s more than a million pounds per second – and 60 times as much as is produced by the world’s human population. According to the UN, “The livestock sector is … the largest sectoral source of water pollution, contributing to eutrophication, ‘dead’ zones in coastal areas and degradation of coral reefs”.

While the livestock sector should be held accountable for mucking up our rivers, we should all share in the responsibility for cleaning up our planet. Everyone can help do this simply by eating vegan foods rather than meat, eggs and dairy products.

5. The Meat Industry Is Razing Our Rainforests
Around 2ha 234.28m² hectares of Amazon rainforest are razed each year for pasture and feed crops. According to the UN, the “expansion of grazing land for livestock is a key factor in deforestation, especially in Latin America”, where the greatest amount of deforestation is occurring.

By eating sustainable vegan foods, we can not only save wildlife and preserve biodiversity but also end the suffering of farmed animals.

Please do your part to alleviate hunger, protect the environment and stop animal suffering: choose tasty vegan foods, and urge others to do the same.