Indian cricket team captain Virat Kohli fired off a letter on behalf of PETA India calling on the Rajasthan Minister for Forest, Environment, Youth Affairs and Sports to take action and relocate an elephant, known only as “Number 44”, to a rehabilitation facility for urgent care. Kohli’s plea comes after a group of American tourists witnessed eight men violently beating the animal at Amber Fort in June 2017 – yet over a year later, she’s still being forced to give rides. 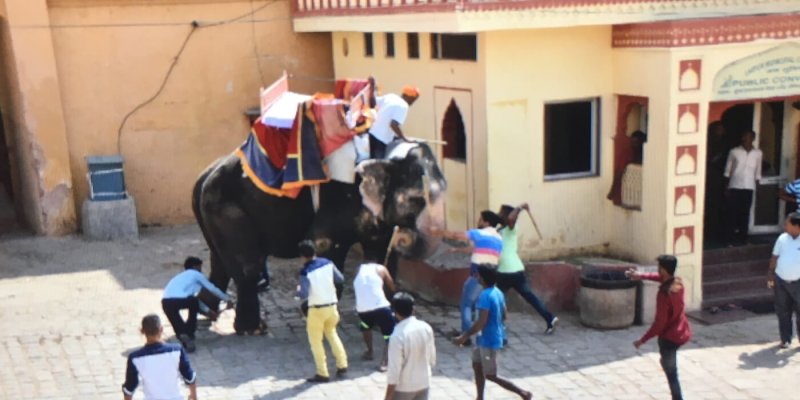 Kohli’s letter follows PETA India’s complaint to the Chief Wildlife Warden of the Rajasthan Forest Department, which resulted in a show-cause notice being issued to Number 44’s custodian, Wasid Khan, holding him responsible for the abuse. The notice stated that an investigation conducted by the Regional Forest Officer for Jaipur Zoo – as well as a photograph supplied by an American witness – indicated that the elephant was treated cruelly, in apparent violation of numerous animal-protection laws. The Jaipur police also registered a First Information Report against unidentified men under Sections 289 and 429 of the Indian Penal Code for mistreating the elephant and putting the public at risk. However, Khan continues to use her for rides.

PETA India notes that captive elephants, such as the ones forced to give rides in Jaipur, are controlled under the threat of beatings, are often denied adequate food and veterinary care, and routinely suffer from foot problems and arthritis because they’re forced to stand on hard surfaces for long periods of time. Many develop neurotic forms of behaviour and die prematurely.

Elephant rides are extremely cruel, as they subject a mighty yet sensitive being to a lifetime in captivity, enduring physical abuse, with inadequate food and veterinary care. You can help stop cruel elephant rides in Jaipur.