After PETA India sent letters to government officials in every state, the Commissioner of School Education for Andhra Pradesh instructed the Regional Joint Directors of School Education and the District Educational Officers in the state to replace animal dissection with modern, non-animal methods. 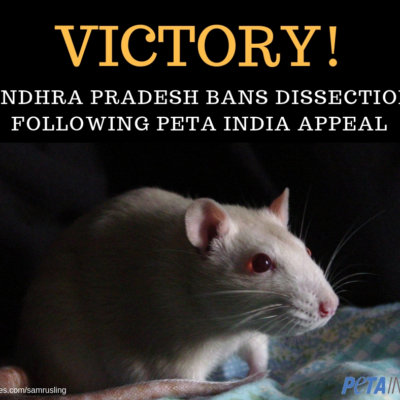 PETA India notes that every year, tens of millions of animals are carved up in classrooms around the world. Frogs are commonly taken from the wild – a practice that wreaks havoc on local ecosystems. Studies have repeatedly shown that using humane alternatives such as ProDissector Frog, BioLab Frog, Digi-Frog, and Froggipedia  an Indian app that Apple recently named iPad App of the Year – is more effective for teaching biology than cutting up dead animals. Such programs can be used repeatedly, which saves time and money, and they also help maintain ecological balance by sparing animals’ lives.

Following efforts by PETA India, progressive scientists, and others, the University Grants Commission prohibited the use of animal dissection in life-sciences and zoology university courses. The Medical Council of India has refused to allow the use of animals to train undergraduate students, instead favouring modern, non-animal teaching methods, including simulations and computer-aided learning. And the Veterinary Council of India is enforcing regulations to phase out the killing of calves for surgical training, introduce the use of computer simulations, establish an ethical body-donation programme, and require that other humane teaching methods be used in veterinary education. The Central Board of Secondary Education had already ended the use of animals in teaching science. Andhra Pradesh has now followed suit.

Does your college or university still use animals for dissection? Tell us about it at [email protected].