The official order of the Honourable Supreme Court of India – which passed a landmark judgment in favour of PETA India and the government advisory body the Animal Welfare Board of India (AWBI) recently, stating that bulls must not be used in any type of performance, including races, bullfights and jallikattu – is now public and also makes clear that cockfighting, dogfighting and any other staged fights between animals, including between humans and animals, for entertainment must end. PETA was represented in court by leading counsel Raj Panjwani. 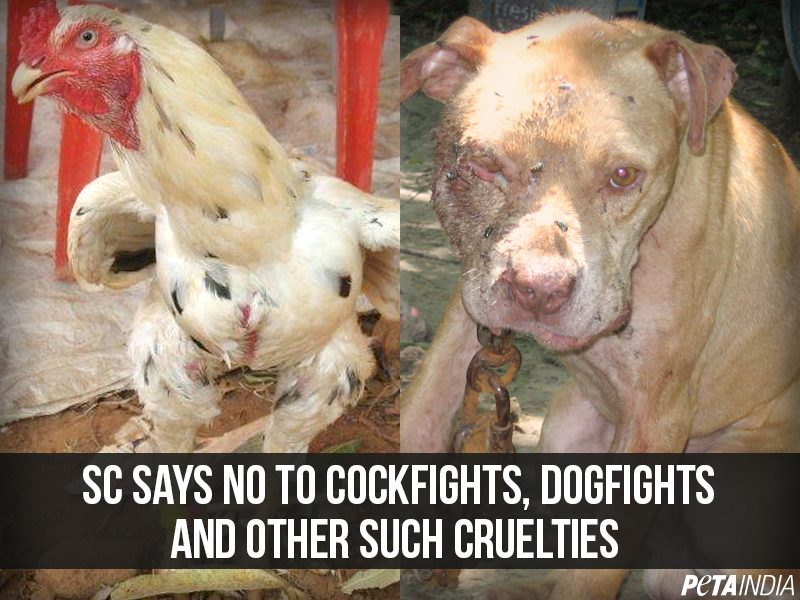 Cockfighting takes place in Andhra Pradesh, Karnataka, Kerala, Maharashtra, Punjab and, Tamil Nadu and elsewhere, even though it is illegal under The Prevention of Cruelty to Animals Act, 1960, which states that it is illegal if anyone “treats any animal so as to subject it to unnecessary pain or suffering … or being the owner permits, any animal to be so treated” or if anyone “solely with a view to providing entertainment … organises, keeps[,] uses or acts in the management [of] any place for animal fighting”. Dogfighting takes place in Haryana and Punjab.

During cockfights, two birds are incited to fight. One of them may die during the event, and both are often critically injured. The birds may also have metal spurs or knives tied to their legs in order to injure the other bird.

In dogfights, two dogs are pitted against one another in a ring. Dogs are encouraged to fight to the death, and the fight can go on for hours – until both dogs are exhausted and at least one is seriously injured or dead.