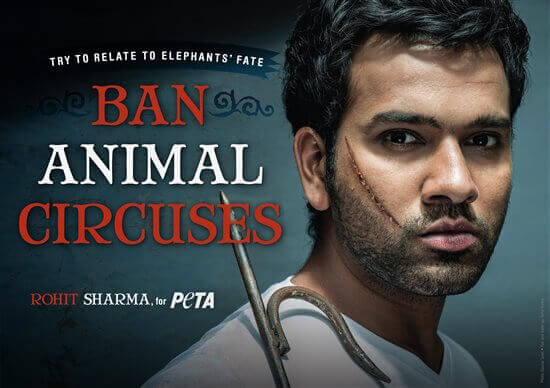 Cricketer Rohit Sharma is famous for his impressive hitting abilities on the pitch. Now, the right-hander is going to bat for elephants by starring in a new PETA India ad shot by Gaurav Sawn. Rohit’s hair and make-up were done by Neha Kamra.

In an exclusive interview with PETA India Rohit shares why he loves animals and why he believes they deserve to be treated kindly. “[T]hey, too, are living beings who have rights just as we do”, the compassionate cricketer says. Rohit also reminds his fans that animals need us to “try and help them” – however we can.

“Animals deserve respect, not to be imprisoned in small enclosures and forced to perform degrading and meaningless tricks out of fear of punishment”, Sharma says. “We cricketers love our sport, and we willingly participate. But animals in circuses are beaten into performing against their will.”

As Rohit knows, animals who are used in circuses especially need our help. PETA’s recent investigation of circuses across India found that elephants, horses, camels, dogs, birds and other animals are routinely abused, both physically and psychologically. And even though the Animal Welfare Board of India decided to stop the registration of elephants for performances in circuses, that decision has yet to be implemented.Elephants in circuses are often beaten and jabbed with ankuses like the one Rohit holds in the ad. These heavy iron rods with sharp, spear-like tips are used to force them to submit and perform frightening and unnatural tricks. When they aren’t performing, elephants are often kept chained so that they can’t take more than a single step in any direction.

Other animals suffer in circuses, too: dogs are crammed into wire cages and rarely let out, and birds are confined to tiny, filthy cages and have their wings crudely clipped so that they cannot fly. Horses are kept tethered on short ropes. PETA found that circuses often severely restrict animals’ access to basic necessities, including water, food and veterinary care.

Please help Rohit and PETA India stop this cruelty. Urge Indian government officials to ban animals from being exhibited or forced to perform in circuses.