Animals are in trouble – even more so than humans – as Delhi’s air hits the “severe” category on the air quality index. So PETA India sent an urgent letter to Arvind Kejriwal, the chief minister of Delhi, asking him to use his powers to implement a ban on tongas – i.e. two-wheeled horse-drawn carts – as per the resolutions passed by the Municipal Corporation of Delhi in 2008 and 2010. We also requested that he take the necessary steps to ban the use of bullock carts in the city immediately and urged him to support the Delhi Mechanisation Project. This would involve approving a special financial plan to replace underweight and overworked bullocks, donkeys, ponies, and horses used for hauling goods with e-rickshaws and provide their impoverished owners with improved livelihood opportunities. 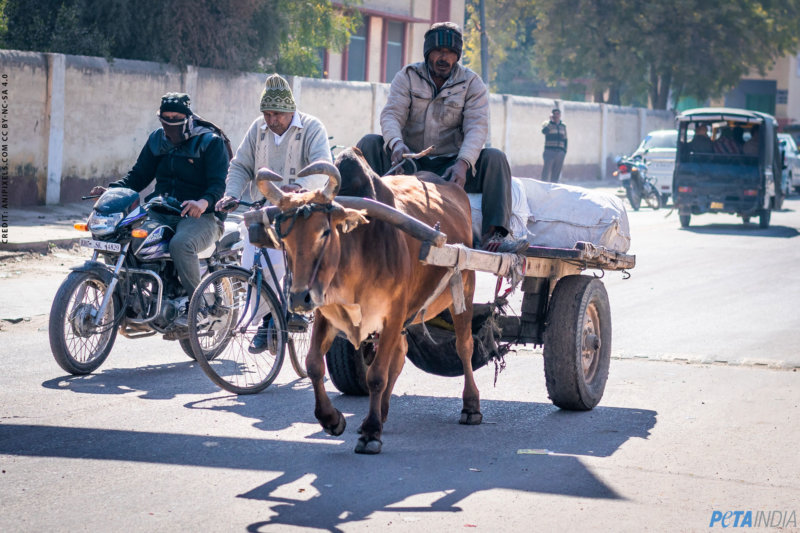 Because of PETA India’s efforts on the mechanisation project, 22 bullock cart owners and nine tonga owners have already seized this opportunity, and their bullocks and horses are now in sanctuaries, where they receive veterinary care and no longer experience the hardship and hazards of pulling heavy carts through the polluted, noisy, congested streets of Old Delhi.

Working animals such as bullocks, donkeys, horses, and camels are highly affected by air pollution, since they’re on the road throughout the day inhaling polluted air emitted from the vehicles that surround them. In Delhi, there are approximately 250 bullocks labouring in 20 market yards and some 150 horses pulling carriages in seven areas. Desperate owners force animals to work even when the air is polluted, they’re sick, or they’ve been injured in traffic accidents. They use whips, painful nose ropes, and spiked bits to force them to haul overloaded carts. The families benefitting from the mechanisation project report that using an e-rickshaw has dramatically increased their earnings and enhanced their social and economic status. With the support of the Delhi government and e-rickshaw dealers, PETA India aims to expand the project throughout Delhi, and our goal is to make the city free of animal carts.