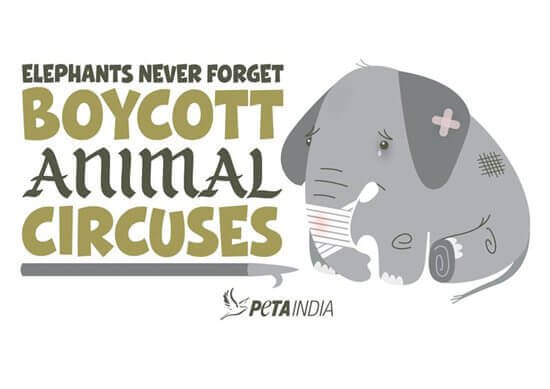 How would you feel if you were chained, abused and kept away from your loved ones? Unimaginable, isn’t it? That’s what elephants experience in circuses. They’re forced to perform by being jabbed with iron hooks, whipped, and beaten, and when not performing, they’re kept in chains. PETA has teamed up with MTV Act for our “Elephants Never Forget” campaign – visit our MTV Act page to urge the government to ban the use of elephants and other animals in circuses.

Animals in circuses perform confusing, unnatural tricks – such as riding bicycles, standing on their heads or jumping through rings of fire – not because they want to but out of fear of punishment. They are also subjected to chronic confinement.

The Indian government has already banned the use of bears, monkeys, tigers, panthers, lions and bulls in performances, but no other animals should be forced to suffer in circuses either. Bolivia, Paraguay, Greece and Bosnia and Herzegovina have banned the use of all animals in circuses. It’s time for India to follow suit.

Here’s what you can do to help end the suffering of animals used in circuses: