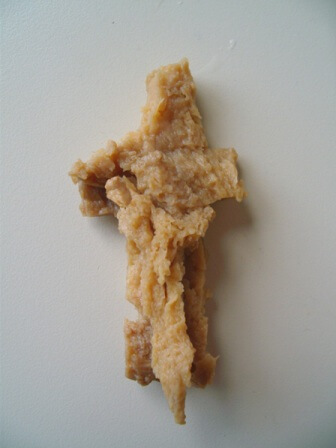 Hallelujah! Jesus appeared in Seitan. Yes! I did spell that correctly.Seitan is gluten made out of wheat, a form of mock meat. Recently a PETA US’ supporter was getting ready to barbeque his mock meat when he noticed an image of Jesus Christ on the cross appear in the godly gluten. Was this the sign of the Lord urging people to go veg? I am not sure, but going vegetarian is surely the right choice.Billions of animals live miserable lives and die violent, bloody deaths. It’s time to say to hell with meat. A lot of people make the switch by choosing to eat mock meat, including soya products, instead of meat.So there’s no reason to kill animals for your taste buds. Do the best thing for your health and for animals by taking our pledge to be veg.