After receiving a complaint from PETA India through its local volunteer, Pune city police registered a first information report (FIR) against the proprietor of Rambo Circus for using fish who are not registered for performance and for forcing dogs to perform tricks which are not approved by the Animal Welfare Board of India (AWBI). The AWBI is the prescribed authority under The Prevention of Cruelty to Animals (PCA) Act, 1960, which regulates the use of animals for performances in the country. In its complaint to the police, PETA India also submitted a report of its investigation into the circus conducted on 26 December 2021 containing evidence of violation of laws and cruelty to animals.

The FIR was registered at the Mundhwa police station under Sections 3 and 11(1)(a) for causing unnecessary and pain and suffering to animals and Sections 26 and 38 (for using unregistered animals and forcing animals to perform unregistered tricks) of the PCA Act. The FIR also includes Section 289 of the Indian Penal Code, 1860, for negligent conduct with respect to a dog who wandered into the audience area.

According to the performing animal registration certificate (PARC) issued to Rambo Circus on 14 April 2021 by  the AWBI under the Performing Animal (Registration) Rules, 2001, notified under the PCA Act, 10 dogs were registered for performances and seven of those were to be retired. However, PETA India’s investigator found that the circus is using seven dogs and two unregistered fish for performances. The dogs were filmed and photographed jumping on top of a flagpole held by a man, sitting on stools and raising their front legs, and wearing a hat while performing – acts which are not registered in the PARC. In addition, a performer was filmed and photographed seeming to drink two fish along with the water they were kept in. He then held the fish between his teeth and displayed them to the audience. He appears to swallow them alive one after the other and then spit them out into a transparent jar filled with water.

Another case against Rambo Circus has been pending before the Court of Judicial Magistrate First Class, Pimpri, since 2016. This case was registered against the circus by Pune police following a complaint by the AWBI for violation of laws as well as cruelty to, neglect of, and misuse of animals.

Inspections by the AWBI have revealed that animals used in Indian circuses are subjected to chronic confinement, physical abuse, and psychological torment. Whips and other weapons are used to inflict pain on them and beat them into submission. Animals perform frightening, confusing tricks, such as jumping through rings of fire, not because they want to but out of fear of violent punishment. Even when they aren’t performing, animals used in circuses endure a lifetime of misery. Their access to water, food, and veterinary care is often severely restricted.

Help End the Use of Animals in Circuses 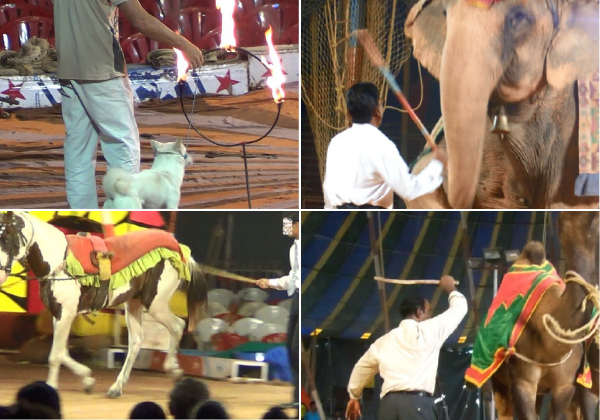