The petition comes in response to Prakash Javadekar – Minister of State (Independent Charge) for Environment, Forest and Climate Change – repeatedly announcing his intention to allow jallikattu by removing bulls from the list of animals who cannot be made to perform, in spite of a 2014 Supreme Court order that confirms the ban.

During jallikattu, terrified bulls are deliberately disoriented, chased, jumped on and dragged to the ground. Often, they become so panicked that they break their bones or die trying to flee from participants. Numerous people, including spectators, have lost their lives or been seriously injured at jallikattu events by bulls who are intentionally frightened as part of the “game”.

During races, bulls are often hit with nail-studded sticks and pushed beyond the point of exhaustion. In bullfights, which often occur in Goa, a round ends when one bull is either killed or manages to flee. 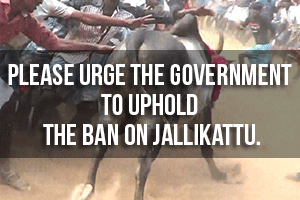