Experts from across India gathered from 31 July to 1 August at the Indian Institute of Technology Delhi for a national conference, “Breaking Barriers Through Bioinformatics and Computational Biology“, to share information on the latest developments in this area.

Several international data-sharing projects have resulted in large amounts of publicly available data that can now be used to predict the toxicity of chemicals without conducting tests on animals. The enormous size of these databases makes them difficult to process using conventional data-analysis tools. However, recent advances in big-data analytics offer new methods for data-driven predictions of chemical toxicity. 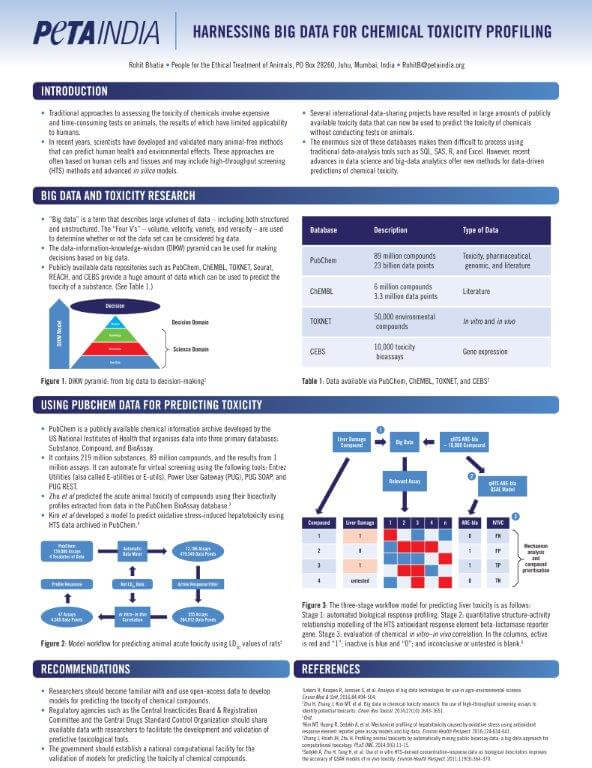 PETA India described how companies can use these advances to reduce the number of tests on animals that they conduct and provided the government with suggestions on promoting these methods among researchers and companies. This approach can be adopted by various international regulatory agencies as an animal-free alternative for predicting a chemical’s toxicity. PETA India’s poster discussed the drawbacks of animal-based approaches to determining toxicity, the progress on data-sharing projects to date, and how data available in public repositories can be used to develop models to predict the toxicity profile of chemical compounds. The steps that the government and regulatory authorities can take to adopt this methodology and reduce animal testing were also discussed.

According to PETA India’s Dr Rohit Bhatia, “Data generated using tests on animals can rarely be used to accurately predict responses in humans because of large species differences, for example in metabolism, physiology and biochemistry. Replacing the animal-based methods that have traditionally been used to predict toxicity with an advanced big-data analytics approach will save time, money, and many animals’ lives.”

By using cruelty-free products. Here’s a list of companies that don’t test on animals: